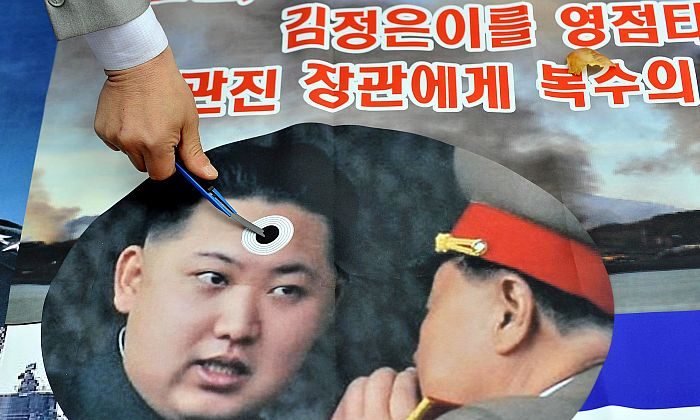 WASHINGTON—North Korea ramped up its rhetoric Tuesday, saying it is preparing to strike Hawaii, Guam and the U.S. mainland. Analysts say it is a familiar pattern of attention seeking but with a new leader heading the rogue regime no one can afford to take the threats lightly.

“The scariest thing for a lot of people is, ‘What if we assess it incorrectly?’ What if we assume that is the same and it is really something different,” said professor Steven Weber, security and political analyst at the University of California–Berkeley.

“The KPA Supreme Command will put on the highest alert all the field artillery units including strategic rocket units and long-range artillery units, which are assigned to strike bases of the U.S. imperialist aggressor troops in the U.S. mainland and on Hawaii and Guam and other operational zone in the Pacific as well as all the enemy targets in South Korea and its vicinity,” reads the military statement posted on the website of the Korean Central News Agency (KCNA).

“Everything will be reduced to ashes and flames the moment the first attack is unleashed,” the military stated.

The Pentagon described the statement as “bellicose rhetoric,” since the United States is fully capable of defending itself and its allies, specifically Japan and the Republic of Korea (ROK).

“The DPRK [Democratic People’s Republic of Korea] will achieve nothing by threats or provocations, which will only further isolate North Korea and undermine international efforts to ensure peace and stability in Northeast Asia,’ said Cathy Wilkinson, Department of Defense spokeswoman for Asian and Pacific Security Affairs, in an email.

Weber says North Korea [also known as the DPRK] typically rolls out rhetoric and attention-seeking provocation when it feels it is being ignored by the major powers.

“They create noise and trouble when that happens to generate some sort of interest and to get additional concessions,” he said in a phone interview.

Others point to the election of a new leader in South Korea. ROK’s first female president, Park Geun-hye, took office in February this year.

“There is a pattern to test new South Korean presidents when taking office,” said Dr. Victor Cha, Korea analyst for the Center of Strategic and International Studies, at a forum on North Korea.

The recent threats are likely to have also been in response to economic sanctions imposed by the U.N. and joint military drills by the United States and South Korea. The sanctions target Pyongyang’s main foreign exchange bank. They are meant to dry up funds for North Korea’s nuclear program. The drills involved 13,000 South Korean and U.S. troops and ended last week.

But it is 30-year-old Kim Jong Un, who assumed the leadership in December 2011 after the death of his father, that is creating unease among security analysts.

Like his father, Kim Jong Il, the young Kim is keeping in lockstep with the single unifying force in the impoverished DPRK, North Korea’s military. As military leader, he is in charge of the fourth largest active military and the largest artillery force in the world, and yet little is known of his aspirations or capabilities.

“He is not a known quantity,” said Weber, “Everyone is trying to figure it out.”

Kim Jong Un has exhibited more aggression than his father.  The North has conducted three nuclear tests, the most recent last month. The military has also displayed intercontinental ballistic missile capability, and has heightened rhetoric.

“The big uncertainty with the new leader in power is, is it the same game or some different kind of game?” said Weber.

East Asia is at an explosive stage with large powers vulnerable to any “miscalculation or inadvertent escalation” and North Korea could well be the trigger, he said.

“This is the most dangerous place on earth for great power interactions,” Weber said.

In an announcement earlier this month, U.S. Defense Secretary Chuck Hagel said the Pentagon would increase U.S. missile defense capability by 50 percent, largely to guard against attacks from North Korea which, he said, had made advances in capabilities.

“I believe it is time to shift that balance to forcing North Korea to change,” he told a CSIS forum last week.

The Epoch Times publishes in 35 countries and in 21 languages. Subscribe to our e-newsletter