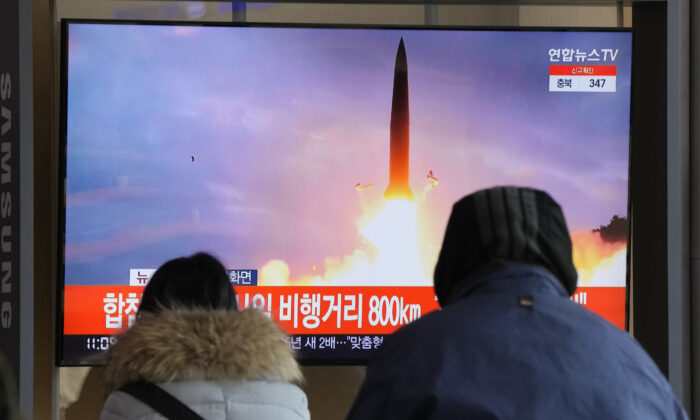 The North Korean regime on Sunday conducted an “important test” for the development of a spy satellite, state-run media said, following claims that a ballistic missile was fired from the east coast of Pyongyang.

The regime conducted “vertical and oblique photographing of a specific area on earth” with cameras loaded on the “reconnaissance satellite” on Feb. 27, state-run outlet Korean Central News Agency (KCNA) said on Monday.

It noted that the test was to confirm the characteristics of the high-resolution camera system, data transmission system, and attitude-control devices.

KCNA said the test “is of great significance in developing the reconnaissance satellite” and released photos of the Korean Peninsula that appeared to be taken from space.

The report did not specify whether or not a missile was tested on Sunday, but Japan and South Korea claimed to have detected an apparent ballistic missile being launched from Pyongyang’s east coast near Sunan.

South Korea’s Joint Chiefs of Staff said that the missile flew to a maximum altitude of around 390 miles at a range of about 90 miles.

Lee Jong-joo, South Korean Unification Ministry spokesperson, said that a detailed analysis of specifications is being conducted to assess the implications of the latest missile launch, which is North Korea’s eighth missile launch this year.

Lee noted that the South Korean government will “thoroughly prepare for all possibilities down the road,” local media outlet Yonhap News Agency reported.

“If their idea was to conduct this at an unguarded moment for the international community while it was responding to the Russian invasion of Ukraine, we absolutely cannot condone this,” Japan’s defense minister Nobuo Kishi said.

Kim underscored the United States’ readiness to engage in serious and sustained diplomacy with North Korea, and reaffirmed the shared goal of complete denuclearization of the Korean Peninsula and “ironclad U.S. commitment to the defense of” South Korea and Japan.

A spy satellite is among an array of sophisticated weapons systems that North Korean leader Kim Jong Un vowed last year to develop under a five-year military modernization plan.

It remains unclear whether North Korea has developed or secured sufficient levels of cameras to be put on a satellite and enable it to monitor South Korean and U.S. military activities.

North Korea successfully launched its first satellite into orbit in 2012, followed by a second in 2016. The regime claimed that both are Earth observation satellites launched under its space development program.

Lee Choon Geun, an honorary research fellow at South Korea’s Science and Technology Policy Institute, said that Pyongyang developed both satellites to spy on its rivals. He said that while the second satellite is still in orbit, there is no evidence that it has relayed any imagery back to North Korea.