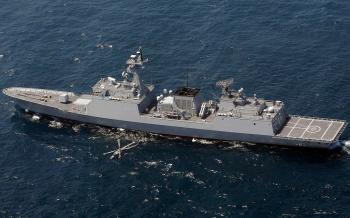 The 41-ton boat is believed to have been held when it entered the North’s exclusive economic zone off the east coast in the northern East Sea.

The four South Korean and three Chinese fishermen on board were questioned and the boat was towed to North Korea’s eastern port of Songjin, the coast guard said in a statement.

The boat had left South Korea’s south-eastern port of Pohang on Aug. 1 and intended to return home on Sept. 10. The coast guard said it was not sure of the exact location of the boat at the time of seizure. The fishing boat sent off its last daily radio report to the coast guard on Saturday evening.

The seizing of the fishing boat has added to the mounting tensions between the two countries. On March 26, a South Korean warship sank near the border with North Korea, killing 46 sailors. South Korean military intelligence and an international investigation have attributed the sinking to a torpedo launched from a North Korean submarine, which North Korea has consistently denied.

In response to the sinking, South Korea is currently staging five days of anti-submarine drills, from Aug. 5 to 9, involving the army, navy, air force, and marines. The exercises are taking place off the western coast, including areas near the two countries’ disputed sea border.

“The Command of Forces of the Korean People's Army in the western sector of the front has made a decisive resolution to counter the reckless naval firing projected by the group of traitors with strong physical retaliation,” Pyongyang’s military command warned in a statement reported by North Korea’s state media, Korean Central News Agency.

In August 2009, North Korea released four South Korean fishermen after holding them in custody for a month after they entered North Korean waters.

Back in 1953, the Korean War ended with a cease-fire. As a peace treaty never replaced the cease-fire, leaving the two countries technically in a state of war ever since.