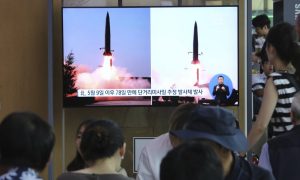 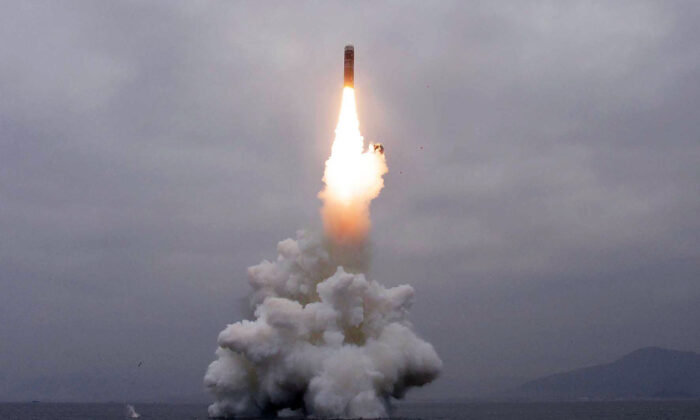 What appears to be a submarine-launched ballistic missile (SLBM) flies in an undisclosed location in this undated picture released by North Korea's Central News Agency (KCNA) on Oct. 2, 2019. (KCNA via Reuters)
Asia & Pacific

SEOUL, South Korea—North Korea confirmed on Oct. 3 it has carried out its first underwater-launched ballistic missile test in three years.

Wednesday’s test of the Pukguksong-3 missile, which North Korea describes as a submarine-launched ballistic missile, is seen as the North’s most high-profile weapons launch since it began diplomacy with the United States early last year.

The Korean Central News Agency said the missile test in the waters off its east coast was successful and “ushered in a new phase in containing the outside forces’ threat to (North Korea) and further bolstering its military muscle for self-defense.”

The KCNA report didn’t elaborate on whether the missile was fired from a submarine, a barge or other underwater launch platforms.

North Korea-dispatched photos showed the missile rising and spewing bright flames above a cloud of smoke from the sea, but the launch platform was not identifiable.

Kim Dong-yub, an analyst from Seoul’s Institute for Far Eastern Studies, wrote on Facebook that the missile was likely fired from a barge built for an underwater launch. He said the missile is under development and that North Korea must test-fire it from a submarine before deploying it.

KCNA said the missile was launched in a vertical mode and that its test had no adverse impact on the security of neighboring countries.

If fired at a standard trajectory, Kim, the analyst, said the missile could have travelled 1,500-2,000 kilometers (930-1,240 miles). He said the Pukguksong-3 is a medium-range missile. North Korea hadn’t tested a medium- and long-range missiles since its entrance to talks with the United States.

North Korean and U.S. officials are to meet on Saturday to restart diplomacy on how to end the North Korean nuclear crisis. That diplomacy largely remains stalemated after the February breakdown of a second summit between President Donald Trump and North Korean leader Kim Jong Un in Vietnam.