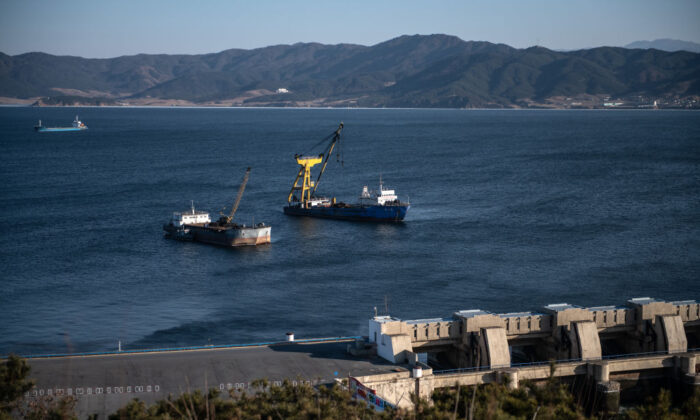 Ships are moored next to the 5-mile long West Sea Barrage, a system of dams, lock chambers, and sluices that close off the Taedong River from the Yellow Sea in Nampo, North Korea, on Feb. 7, 2019. (Carl Court/Getty Images)
Asia & Pacific

North Korea has “repeatedly” released water from a dam near its border with South Korea without giving prior notice, which is a requirement of the two nations’ inter-Korean agreement, according to a South Korean official.

“As rain has fallen heavily in North Korea, the North is repeatedly opening and closing the floodgate of Hwanggang Dam,” the official said.

The Hwanggang Dam is located about 26 miles (42 kilometers) north of the Korean Demilitarized Zone. According to the report, the possible damage from the water release remains minimal in South Korea.

The official said that South Korean authorities would “closely monitor” the situation following the heavy rain in North Korea, with measures being established in cooperation with government agencies and the military.

The two countries signed an inter-Korean agreement in October 2009 after North Korea’s water release from the dam resulted in flooding downstream that killed six South Koreans in Yeoncheon County.

The South Korean government has repeatedly urged North Korea to give notice before releasing water from the dam, citing possible damage and danger, but Pyongyang has remained unresponsive.

In July, the water level at a bridge on the river in Yeoncheon County reached over 3 feet as a result of North Korea’s water release from the dam, prompting South Korean authorities to evacuate visitors on the riverbank.

Yeoncheon County issued alert messages to nearby residents, warning them to move to a safe area until the water level decreased. It did not specify how many people were evacuated at the time.