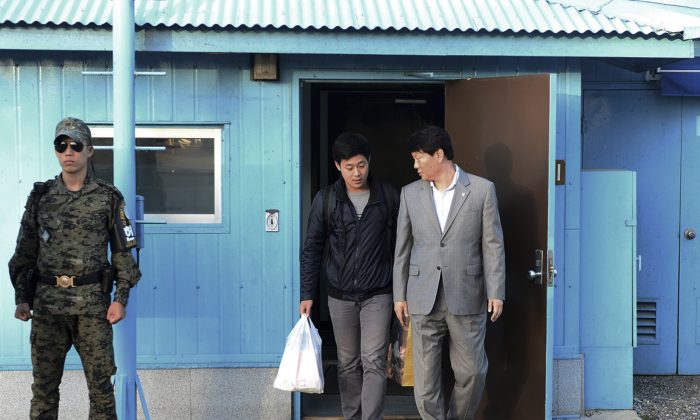 SEOUL, South Korea—North Korea on Monday freed a South Korean national who is a student at New York University, in a possible sign it wants better ties with rival Seoul and may back away from a recent threat to launch a long-range rocket later this month.

North Korean state media said it “deported” Won Moon Joo, 21, at the border village of Panmunjom as a “humanitarian” measure about six months after he had been arrested for crossing the Chinese border into North Korea. It didn’t elaborate.

Joo has permanent residency status in the United States. The exact motivation for his travel to North Korea wasn’t clear.

North Korea often uses detainees in attempts to win political concessions and aid from rivals Seoul and Washington, and a South Korean analyst said it may have calculated that since Joo’s alleged crime was relatively minor, his release might boost the impoverished, authoritarian country’s international image and lead to more investment and tourism.

Ten days ago, Joo was presented to the media in Pyongyang and said he had not been able to contact his family but wanted them to know he was healthy. For most of the 30-minute appearance, he read a prepared — and probably coached — speech praising the country, its government and people. Other foreigners who have been detained in North Korea have said after their release that they were coached closely on what to say in such statements.

Joo is one of four South Koreans known to be held in North Korea. The other three are accused of more serious espionage acts or attempts to establish underground Christian churches in the country.

The release comes amid speculation that North Korea may not go ahead with an earlier threat to launch what it calls a satellite aboard a long-range rocket to mark this week’s 70th birthday of its ruling party.

A launch would deepen an international standoff. The U.S., South Korea and their allies say North Korea’s launches are disguised tests of long-range missile technology that are banned by the United Nations. Recent commercial satellite imagery, however, showed no signs of preparations at the North’s main launch site. South Korean defense officials also have seen no indication of an imminent launch.

With a Rocket’s Red Glare? North Korea Gears Up for Major Fete

The launch plans earlier cast doubt over a possible easing in animosity between the Koreas. In late August they agreed to resume the reunions of families separated by the Korean War after ending a military standoff caused by a mine blast on the border that the South blamed on the North. The blast seriously injured two South Korean soldiers.

Seoul’s Unification Ministry described the North’s decision to release Joo as “fortunate” and urged it to free the three others.

The Koreas are divided along the world’s most heavily fortified border, a legacy of the 1950-53 Korean War that ended with an armistice, not a peace treaty, thus leaving the peninsula in a technical state of war.