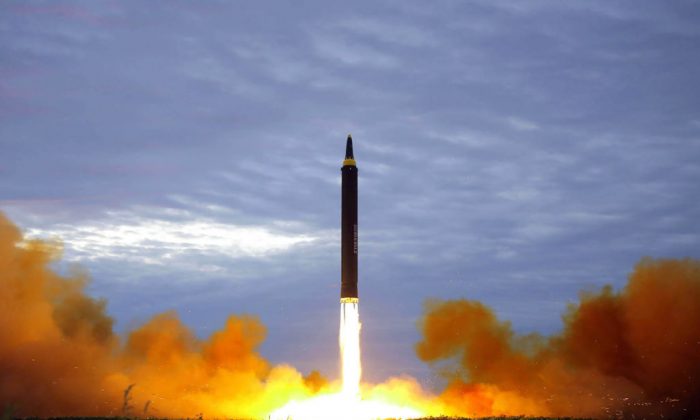 North Korea is expected to conduct another nuclear missile test soon. The test is expected for Sept. 9, the same day as the anniversary of the founding of the Democratic People’s Republic of Korea, as the Daily Mail reported.

Kim Jong Un took peculiarly arranged and highly posed photos with youth troops in the regime’s army, referred to as the “active secretaries of primary organizations of the youth league of the Korean People’s Army (KPA)” by North Korea’s state-run media.

The photo session took place outside the Kumsusan Palace of the Sun, a building that houses the preserved and viewable remains of both Kim Jong Il, the father of Kim Jong Un, and Kim Il Sung, the grandfather of Kim Jong Un and the founder of communist North Korea.

Satellite images have hinted that the photo event by the Kumsusan mausoleum coincides with the suspected nuclear missile test. Last year, the regime’s fifth nuclear test was carried out on Sept. 9. A North Korean think tank, 38 North, a project of The U.S.-Korea Institute at Johns Hopkins School of Advanced International Studies said, “We cannot rule out that a sixth nuclear test could be conducted at any time with minimal advance warning.” The project analyzes satellite footage and has been monitoring activity at North Korean nuclear test sites.

Tensions have remained high between North Korea and other countries in the region, along with the United States and the allies the country supports in the region. South Korean, Japanese, and U.S. forces conducted joint military exercises yesterday.

North Korea has been trying to develop nuclear tipped missiles that can hit the United States. Kim Jong Un threatened to strike the U.S. territory of Guam, but backed down. Although originally the United States sought more nonmilitary, diplomatic measures to deal with the North Korean threat, the outlook has changed in light of unceasing and unpredictable actions by the communist regime. The communist regime in China, North Korea’s closest ally, has also not been consistent in supporting a nuclear-free North Korea. The Chinese regime has come under criticism by President Donald Trump for its supply of resources that prop up North Korea. The regime has also flip-flopped around what its true intentions are in North Korean nuclear negotiations.

On Aug. 28 North Korea upped the stakes by sending a missile out over Japan, as reported by The Epoch Times. The missile immediately prompted outrage from the United States over the safety of its close Asian ally. That action led to Japan joining in what would normally be U.S.-South Korea joint military exercises.