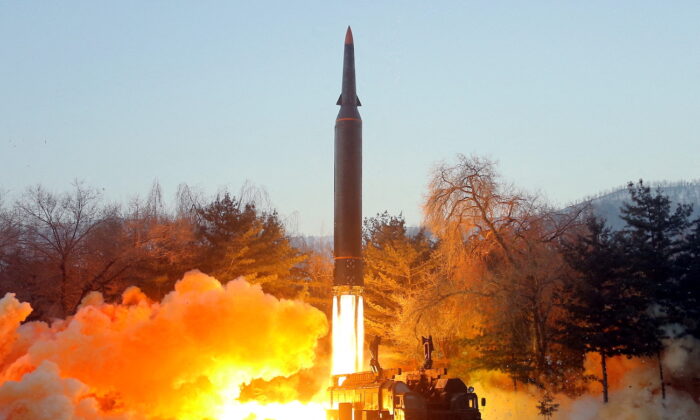 A view of what state news agency KCNA reports is the test firing of a hypersonic missile at an undisclosed location in North Korea, on Jan. 5, 2022. (KCNA via Reuters/Reuters is unable to verify this image)
Asia & Pacific

North Korea’s state media said Thursday the country successfully fired a “hypersonic” missile, a claim that has yet to be independently confirmed.

Other aspects such as flight control and the missile’s ability to operate in the winter were also confirmed in the test launch, KCNA asserted, adding that the missile was able to combine “multi-step glide jump flight and strong lateral manoeuvring.”

The Central Committee of the ruling Workers’ Party expressed “great satisfaction” at the results of the missile test observed by leading weapons officials, KCNA reported.

“The successive successes in the test launches in the hypersonic missile sector have strategic significance in that they hasten a task for modernizing strategic armed force of the state,” the KCNA report claims.

The launch was flagged by the governments of Japan and South Korea, which said that it involved a possible ballistic missile—not a hypersonic missile.

Hypersonic weapons fly towards targets at lower altitudes and can achieve more than five times the speed of sound—or about 6,200 kilometers per hour (3,850 mph). They are harder to intercept and pose a higher threat level than ballistic missiles, which fly into outer space before returning on steep trajectories.

The U.S. State Department did not immediately respond to requests for comment on North Korea’s report it had tested a hypersonic weapon.

The department said after the Wednesday launch that Pyongyang has violated multiple U.N. Security Council Resolutions—which ban all ballistic missile and nuclear tests by North Korea—and poses a threat to the international community.

North Korea claimed it first tested a hypersonic missile in September 2021. Later, in October 2021, Pyongyang said it launched a “new type” of ballistic missile from a submarine, marking its last missile launch before Wednesday’s.

Talks led by the United States seeking to get North Korea to advance denuclearization—including to surrender its nuclear weapons and ballistic missile arsenal—have been stalled since February 2019; Kim and then-President Donald Trump were unable to come to an agreement over disputes about international sanctions on Pyongyang.

The Biden administration has said it is open to a dialogue with North Korea at any time without preconditions, but the authoritarian state accused the United States of having “hostile policies” such as military drills and sanctions that it must withdraw against Pyongyang before any talks can resume.

The United States recently reiterated that it holds “no hostile intent” toward Pyongyang.

Editor’s note: This article has been updated to clarify that KCNA’s report of the “hypersonic” missile launch has yet to be independently verified.