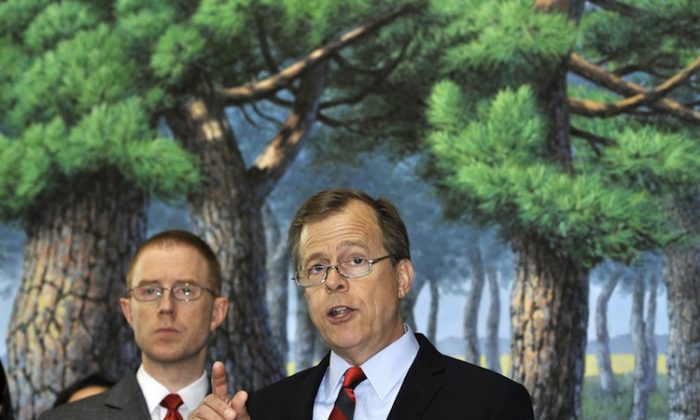 U.S. Special Envoy for North Korea Policy Glyn Davies speaks to the media after three-way talks with Japan and South Korea at the Foreign Ministry in Seoul on May 21. (Jung Yeon-je/AFP/GettyImages)
World

North Korea was warned by the United States on Monday that it should not conduct another nuclear test, otherwise it will face even more sanctions, just weeks after the isolated, communist state failed to launch a rocket.

The international community and analysts have widely speculated that North Korea would conduct another nuclear test soon, as it had done in 2006 and 2009—also after failing to test-fire rockets.

“It would be a serious miscalculation, a mistake, if North Korea were to engage in a nuclear test,” Glyn Davies, special representative for North Korea Policy, said in Seoul on May 21, according to a transcript. “This new regime in Pyongyang saw that the world community, the international community, was united in reacting to the missile launch on April 13.”

North Korea had agreed with the United States on Feb. 29 not to carry out any long-range missile or nuclear tests, in exchange for hundreds of thousands of tons of food aid. However, the United States called off the deal after Pyongyang said it would test a rocket that it claimed would send a satellite into orbit to commemorate the 100th birthday of its founder, Kim Il Sung.

After the regime launched the missile, the way the international community reacted “should be a very strong signal to Pyongyang that a further miscalculation will be met with similar united action by the world community,” Davies added.

But Davies said the United States is still open to further negotiations with the North.

“The United States has a dual track policy of engagement on the one hand but pressure on the other. That engagement aspect remains open,” he said. “If they make the right choices, there can be a different future for North Korea and the people of North Korea.”

Last week, the U.S.-based website 38North posted satellite photographs that apparently show the country working on an experimental light water reactor that would enable it to produce material for nuclear weapons or tests. The reactor could become operational in one to two years, it added.