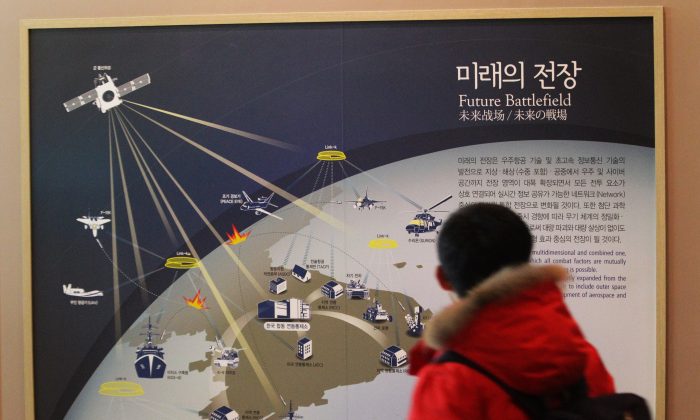 A South Korean student looks at a picture, which shows how the cyber warfare is going to be waged in the future in the Korean Peninsula if Korean War takes place, at Korea War Memorial Museum in Seoul, South Korea, Tuesday, Dec. 23, 2014. An hours-long Internet outage in one of the world’s least-wired countries was probably more inconvenient to foreigners than to North Korean residents, most of whom have never gone online. (AP Photo/Ahn Young-joon)
Asia & Pacific

LONDON—North Korea’s microscopic corner of the Internet has had a rough couple of days, suffering seven outages in 48 hours, according to one Web traffic monitor.

The mysterious problems have some talking of a retaliatory cyberattack by the United States, which holds Pyongyang responsible for last month’s spectacular hack of Sony Pictures. American officials have fueled speculation with vague denials, but security experts say North Korea’s Internet infrastructure is so skeletal that even amateurs — or a simple glitch — could have brought it clattering down.

Even on a good day, Web watchers see less Internet traffic from North Korea than from the Falkland Islands, a North Atlantic archipelago of fewer than 3,000 people, said Gayer. Media companies like Sony easily dwarf the communist country’s web presence.

He said that if the network was targeted by a kind of distributed denial-of-service — or DDoS — attack, the list of suspects is endless.

“Any kid that knows how to run a small-sized DDoS amplification attack can do it from his home.”

For many, the uncertainty over the outage — and lingering doubts over who hacked Sony — illustrates how little we can really know about attacks in the Information Age.

“This whole incident is a perfect illustration of how technology is equalizing capability,” Bruce Schneier, a respected security expert, said in a blog post. “In both the original attack against Sony, and this attack against North Korea, we can’t tell the difference between a couple of hackers and a government.”

Here’s what is known:

Cowie characterized the outages as a “return to instability,” and said they were the same type of outages that caused the original disruption.

Hiccups continued until Wednesday. Internet monitor BGPmon says it has detected a total of seven interruptions, with the last hour-long outage reported between 6:30 and 7:45 GMT.

North Korea has a tiny online footprint, thousands of millions of times smaller than that of the United States or even archrival South Korea. Gayer, the Incapsula researcher, pegged the country’s total bandwidth at 2.5 gigabits per second, a minuscule amount of traffic which could easily be overwhelmed by a denial-of-service attack. Only last week, a London teenager pleaded guilty to a cyberattack against an anti-spam group which clocked in at 300 gigabits per second.

U.S. officials have refused to be drawn over the online mischief, feeding speculation that American retribution may be to blame for North Korea’s Internet problems.

“Ask the North Koreans if their Internet wasn’t working,” said U.S. State Department representative Marie Harf in response to questions about the outages on Tuesday. “I would check with them.”

The attack doesn’t fit the pattern of an American cyber-strike, said Dan Holden of Arbor Networks, which works to block denial-of-service attacks. He said online activists may be to blame, and social media chatter provides some support for the claim.

One prominent account linked to Anonymous, the amorphous collective of self-appointed cyber-vigilantes, briefly claimed credit for knocking North Korea offline before it was itself was yanked from the Internet by Twitter. Rival claims — from obscure groups carrying names like “Lizard Squad” or “Gator League” — were even harder to assess.

This Has Happened Before

North Korea’s Internet has gone dark before. In March 2013 the nation experienced connectivity problems for the better part of a day and a half.

The North Korean government blamed the United States for the problems, but their cause has never been publicly confirmed.

From The Associated Press. Eileen Sullivan in Washington contributed to this report.