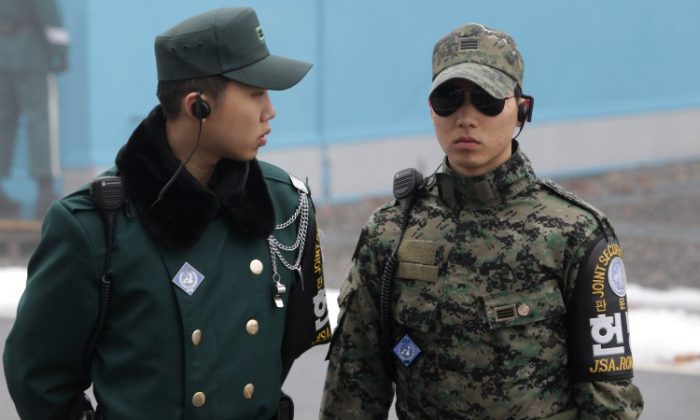 A file photo of South Korean soldiers standing guard at the border village of Panmunjom between South and North Korea at the Demilitarized Zone (DMZ) on Feb. 27, 2013, in South Korea. North Korea announced on March 30, 2013, it is in a “state of war” with South Korea. (Chung Sung-Jun/Getty Images)
World

North Korea in a ‘State of War’ With South Korea

SEOUL, South Korea (AP) — North Korea warned Seoul on Saturday that the Korean Peninsula had entered “a state of war” and threatened to shut down a border factory complex that’s the last major symbol of inter-Korean cooperation.

Analysts say a full-scale conflict is extremely unlikely, noting that the Korean Peninsula has remained in a technical state of war for 60 years. But the North’s continued threats toward Seoul and Washington, including a vow to launch a nuclear strike, have raised worries that a misjudgment between the sides could lead to a clash.

In Washington, the White House said Saturday that the United States is taking seriously the new threats by North Korea but also noted Pyongyang’s history of “bellicose rhetoric.”

North Korea’s threats are seen as efforts to provoke the new government in Seoul, led by President Park Geun-hye, to change its policies toward Pyongyang, and to win diplomatic talks with Washington that could get it more aid. North Korea’s moves are also seen as ways to build domestic unity as young leader Kim Jong Un strengthens his military credentials.

On Thursday, U.S. military officials revealed that two B-2 stealth bombers dropped dummy munitions on an uninhabited South Korean island as part of annual defense drills that Pyongyang sees as rehearsals for invasion. Hours later, Kim ordered his generals to put rockets on standby and threatened to strike American targets if provoked.

North Korea said in a statement Saturday that it would deal with South Korea according to “wartime regulations” and would retaliate against any provocations by the United States and South Korea without notice.

“Now that the revolutionary armed forces of the DPRK have entered into an actual military action, the inter-Korean relations have naturally entered the state of war,” said the statement, which was carried by Pyongyang’s official Korean Central News Agency, referring to the North’s official name, the Democratic People’s Republic of Korea.

Provocations “will not be limited to a local war, but develop into an all-out war, a nuclear war,” the statement said.

Hours after the statement, Pyongyang threatened to shut down the jointly run Kaesong industrial park, expressing anger over media reports suggesting the complex remained open because it was a source of hard currency for the impoverished North.

“If the puppet group seeks to tarnish the image of the DPRK even a bit, while speaking of the zone whose operation has been barely maintained, we will shut down the zone without mercy,” an identified spokesman for the North’s office controlling Kaesong said in comments carried by KCNA.

South Korea’s Unification Ministry responded by calling the North Korean threat “unhelpful” to the countries’ already frayed relations and vowed to ensure the safety of hundreds of South Korean managers who cross the border to their jobs in Kaesong. It did not elaborate.

South Korean Defense Ministry spokesman Kim Min-seok said the country’s military remains mindful of the possibility that increasing North Korean drills near the border could lead to an actual provocation.

“The series of North Korean threats — announcing all-out war, scrapping the cease-fire agreement and the non-aggression agreement between the South and the North, cutting the military hotline, entering into combat posture No. 1 and entering a ‘state of war’ — are unacceptable and harm the peace and stability of the Korean Peninsula,” Kim said.

“We are maintaining full military readiness in order to protect our people’s lives and security,” he told reporters Saturday.

In Washington, Caitlin Hayden, a spokeswoman for the White House National Security Council, noted the “reports of a new and unconstructive statement from North Korea.”

“We take these threats seriously and remain in close contact with our South Korean allies,” Hayden said. “But, we would also note that North Korea has a long history of bellicose rhetoric and threats, and today’s announcement follows that familiar pattern.”

The White House has stressed the U.S. government’s capability and willingness to defend itself and its allies and interests in the region, if necessary.

“We remain fully prepared and capable of defending and protecting the United States and our allies,” Hayden said.

The two Koreas remain technically at war because the 1950-53 Korean War ended in a truce, not a peace treaty. Naval skirmishes in the disputed waters off the Korean coast have led to bloody battles several times over the years.

But on the streets of Seoul on Saturday, South Koreans said they were not worried about an attack from North Korea.

“From other countries’ point of view, it may seem like an extremely urgent situation,” said Kang Tae-hwan, a private tutor. “But South Koreans don’t seem to be that nervous because we’ve heard these threats from the North before.”

The Kaesong industrial park, which is run with North Korean labor and South Korean know-how, has been operating normally, despite Pyongyang shutting down a communications channel typically used to coordinate travel by South Korean workers to and from the park just across the border in North Korea. The rivals are now coordinating the travel indirectly, through an office at Kaesong that has outside lines to South Korea.

North Korea has previously made such threats about Kaesong without acting on them, and recent weeks have seen a torrent of bellicose rhetoric from Pyongyang. North Korea is angry about the South Korea-U.S. military drills and new U.N. sanctions over its nuclear test last month.