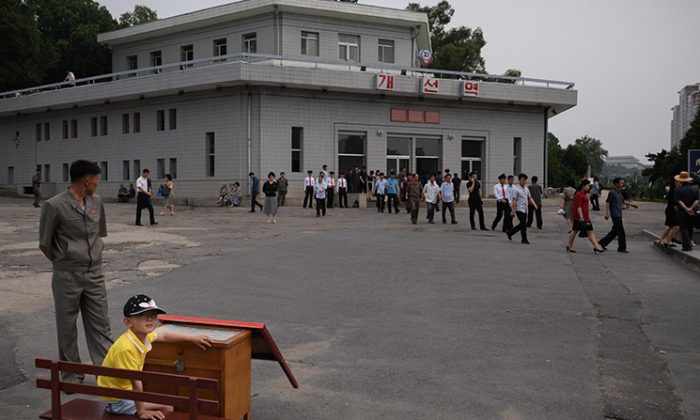 A boy sits at a desk outside a subway station of the Pyongyang metro in Pyongyang, North Korea, on June 17, 2018. (ED JONES/AFP/Getty Images)
Asia & Pacific

The North Korean economy shrank 3.5 percent last year, according to a report released on Friday, July 20, by South Korea’s central bank. It was the biggest drop-off since 1997, when North Korea’s Gross Domestic Production (GDP) decreased sharply by 6.5 percent.

In contrast, the economy of the democratically governed, South Korea grew by 3.1 percent in 2017.

The Bank of Korea (BOK) attributed the economic contraction in North Korea to a drop in its mining output and a contraction in its heavy & chemical industry.

Data shows production in the  sector decreased by 10.4 percent, which was viewed as the result of the newly adopted and implemented U.N. bans last year in response to Kim Jong-Un’s series of disturbing nuclear tests.

Exports of North Korean minerals, including coal, are banned under U.N. resolution 2371, adopted in August last year. The U.N. Security Council also unanimously imposed another set of sanctions on North Korea in resolution 2397 on Dec. 22, 2017.

Apart from the rare violation, “those sanctions are basically being held,” U.S. Director of National Intelligence Dan Coats told NPR. A BOK official also noticed transactions between North Korea and China had tumbled “significantly” in the first half of this year, Yonhap News Agency reported.

Kim Jong-Un is unlikely to be given good news this year on the economic side of things.

The U.N. resolution 2397 limits North Korea’s annual refined petroleum inflow to 500,000 barrels starting on Jan. 1, 2018. It also requires countries using North Korean laborers to send them back no later than 24 months from the adoption of the resolution.

“The U.N. imposed fresh sanctions against the North in August and December, and those will make a serious dent in the North Korean economy this year,” the BOK official told Yonhap News Agency.

North Korea’s last economic downturn in 1997 happened amid a severe famine in which two to three million people, according to estimate of a range of experts, died between 1995 and 1998, the New York Times reported.

The BOK has been estimating the GDP of North Korea annually since 1991 using basic data supplied by relevant institutions. In the absence of reliable data from the communist regime, the BOK’s estimation is widely regarded as the most dependable source on the economic status of North Korea.