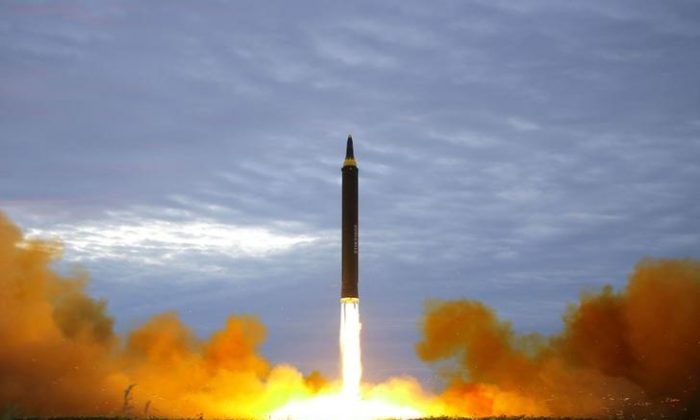 North Korea has reportedly fired another missile over Japan less than a month after it sent one over the island in obvious provocation to the United States and its allies.

The unidentified missile reached an altitude of about 480 miles and flew 2,300 miles, according to South Korea‘s military—far enough to reach the U.S. Pacific territory of Guam.

The missile passed over Japan’s northern island of Hokkaido and landed in the Pacific Ocean, Japan’s government told its citizens.

The country’s military did not try to shoot it down.

Japan warned its citizens not to touch anything that looks like debris from the missile and to report anything they find immediately to the police, the Japan Times reported.

The North‘s launch comes a day after the North threatened to sink Japan and reduce the United States to “ashes and darkness” for supporting a United Nations Security Council resolution imposing new sanctions against it for its Sept. 3 nuclear test, its most powerful by far.

The Security Council voted unanimously on a U.S.-drafted resolution and a new round of sanctions on Monday, banning North Korea‘s textile exports and capping fuel supplies.

Australia, a strong and vocal ally of the United States, quickly condemned the launch.

“This is another dangerous, reckless, criminal act by the North Korean regime, threatening the stability of the region and the world and we condemn it, utterly,” Australian Prime Minister Malcolm Turnbull said in an interview with Sky News.

He added this was an obvious retaliation for the U.N. Security Council sanctions.

“It’s a sign that the sanctions are working,” he said.

The South Korean and U.S. militaries are analyzing details of the launch, South Korea’s Office of the Joint Chiefs of Staff said.

Moon dismissed the possibility of deploying nuclear weapons in his country, saying in an interview with CNN that it could “lead to a nuclear arms race in northeast Asia.”

However Jae-in did say that South Korea needs to improve its military capabilities.

On Aug. 29, North Korea launched its first missile over Japan, also over Hokkaido island, and into the Pacific Ocean. On Sept. 13, it conducted its sixth test of a nuclear bomb, creating a 6.3-magnitude earthquake.

U.S. President Donald Trump has strongly condemned North Korea’s actions, and vowed that it will never be allowed to threaten the United States with a nuclear-tipped missile.

He has asked China to do more to rein in its northern neighbor, and China, a member of the U.N. Security Council, also voted to sanction its communist neighbor this week despite being the North’s biggest ally and economic supporter.

China has condemned the North’s provocations but has done little to topple the rogue nation, fearing an influx of refugees could pour over its border and a hostile nation could take up residence on its doorstep.

North Korea Threatens to ‘Sink’ Japan, Reduce US to ‘Ashes and Darkness’