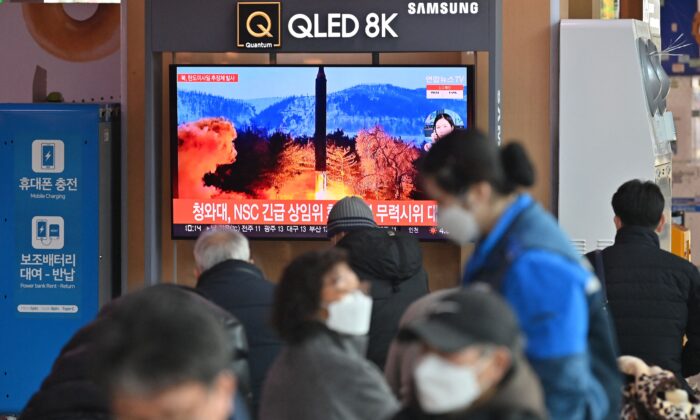 People watch a television screen showing a news broadcast with file footage of a North Korean missile test, at a railway station in Seoul, South Korea, on Feb. 27, 2022, after North Korea fired an "unidentified projectile" according to the South's military. (Jung Yeon-je/AFP via Getty Images)
Asia & Pacific

South Korea’s Joint Chiefs of Staff confirmed to Yonhap that North Korea fired a suspected missile toward the sea from its east coast near Sunan, where the isolated, communist regime’s airport is located.

The missile fired on Sunday flew to a maximum altitude of around 390 miles and a range of about 90 miles, the Joint Chiefs of Staff said in a statement.

“For other specifics on the missile, the intelligence authorities of South Korea and the United States are conducting a detailed analysis,” the defense agency said in a statement to reporters. “Our military is tracking and monitoring related [North Korean] movements and maintaining a readiness posture,” it added.

The move was criticized by South Korean and Japanese officials.

“There have been frequent launches since the start of the year, and North Korea is continuing to rapidly develop ballistic missile technology,” Japan’s Defense Minister Nobuo Kishi said in a televised announcement, according to Reuters.

Kishi also made reference to Russia’s invasion of Ukraine. A North Korean official issued a statement last week that appeared to endorse Russia.

“If their idea was to conduct this at an unguarded moment for the international community while it was responding to the Russian invasion of Ukraine, we absolutely cannot condone this,” Kishi said.

“While we have assessed that this event does not pose an immediate threat to U.S. personnel, territory or that of our allies, we will continue to monitor the situation,” the command said in a news release. “The U.S. commitment to the defense of the ROK and Japan remains ironclad,” it added, referring to South Korea’s government.

Since the start of 2022, North Korea’s regime has launched at least eight missiles, according to an analysis of media reports. North Korea’s previous test was on Jan. 30, when it fired a Hwasong-12 intermediate-range ballistic missile.

Several analysts noted that North Korea has stepped up the number of missile launches even before the Russia-Ukraine conflict.

“[Russia’s] war shapes almost all geopolitics right now, and should factor somewhere in Kim’s [calculus], but even ‘taking advantage of distraction’ seems to presume too much, since (North Korea) was already testing aggressively before the war,” John Delury, a professor at South Korea’s Yonsei University, wrote on Twitter.