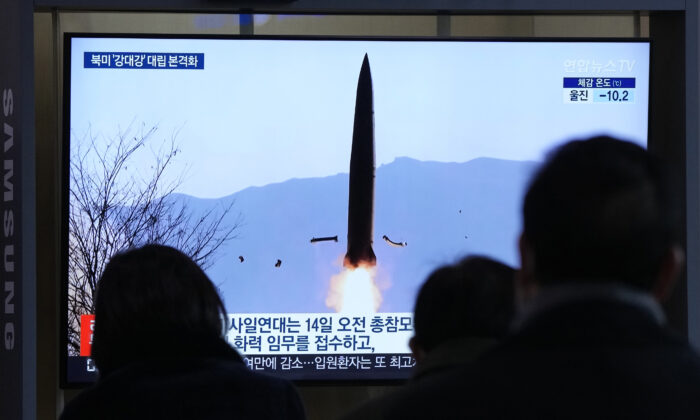 South Korea’s Joint Chiefs of Staff (JCS) confirmed to Yonhap News Agency that a suspected ballistic missile was fired from North Korea’s east coast near Sunan and traveled about 270 kilometers (168 miles) at a maximum altitude of 560 kilometers (348 miles).

JCS stated that the intelligence authorities of South Korea and the United States are conducting a detailed analysis of the incident.

Japan’s Defense Ministry also claimed to have detected “at least one ballistic missile” launch eastward from North Korea at around 8:47 a.m. on Saturday and estimated that it fell outside of Japan’s Exclusive Economic Zone.

No damage has been reported as a result of the missile firing, the ministry stated.

This marks Pyongyang’s ninth reported missile launch of the year, which came less than a week after the nuclear-armed nation launched a suspected ballistic missile into the sea on Feb. 27.

North Korea’s state-run media reported Monday that Sunday’s test aimed to develop a “reconnaissance satellite” capable of capturing a specific area on Earth from space, but did not confirm whether a missile was used in the test.

The move was strongly condemned by the South Korean and Japanese governments.

“The North’s recent series of ballistic missile launches are a significant threat to not only the international community but also peace and stability on the Korean Peninsula,” South Korea’s military said. “We strongly urge the North to immediately stop them.”

The 11 nations urged all U.N. members to implement all Security Council resolutions that obligate North Korea to abandon its weapons of mass destruction and ballistic missile programs “in a complete, verifiable, and irreversible manner.”

They also urged North Korea to engage in diplomacy talks and reaffirmed their readiness for dialogue.

North Korea also launched a Hwasong-12 intermediate-range ballistic missile on Jan. 30, which was seen as being a step closer to Pyongyang lifting its self-imposed moratorium on testing long-range intercontinental ballistic missiles.

The nuclear-armed country previously said that it would consider restarting all temporarily suspended actions due to the United States not showing any signs of dropping its “hostile policies.”