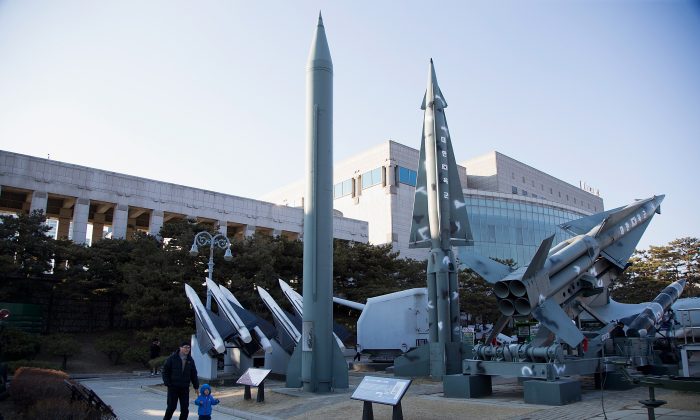 North Korea Could Soon Have Plutonium Bombs, Says US Official

WASHINGTON—North Korea has expanded a uranium enrichment facility and restarted a plutonium reactor that could start recovering material for nuclear weapons in weeks or months, the U.S. intelligence chief said Tuesday in delivering the annual assessment by intelligence agencies of the top dangers facing the country.

He also said Islamic militants and those inspired by the Islamic State group will continue to pose a threat to Americans at home and abroad; al-Qaida remains an enemy; and the U.S. will continue to see cyber threats from China, Russia and North Korea.

[North Korea] could begin to recover plutonium “within a matter of weeks to months.”

Director of National Intelligence James Clapper said that Pyongyang announced in 2013 its intention to refurbish and restart nuclear facilities, to include the uranium enrichment facility at Yongbyon and its plutonium production reactor, which was shut down in 2007. Clapper said U.S. intelligence had assessed that North Korea has expanded Yongbyon and restarted the plutonium production reactor there.

Clapper also told the Senate Armed Services Committee in his opening statement that North Korea has been operating the reactor long enough that it could begin to recover plutonium “within a matter of weeks to months.”

Both findings will deepen concern that North Korea is not only making technical advances in its nuclear weapons program, following its recent underground test explosion and rocket launch, but is working to expand what is thought to be a small nuclear arsenal. U.S.-based experts have estimated that North Korea may have about 10 bombs, but that could grow to between 20 and 100 by 2020.

North Korea on Sunday launched a rocket carrying an Earth observation satellite into space. The launch followed a Jan. 6 underground nuclear explosion that North Korea claimed was the successful test of a “miniaturized” hydrogen bomb. Many outside experts were skeptical and Clapper said the low yield of the test “is not consistent with a successful test of a thermonuclear device.”

Clapper said that Pyongyang is also committed to developing a long-range, nuclear-armed missile that is capable of posing a direct threat to the United States, “although the system has not been flight-tested.”

Clapper said U.S. information systems, controlled by the U.S. government and American industry, are vulnerable to cyberattacks from Russia and China. North Korea “probably remains capable and willing to launch disruptive or destructive cyberattacks to support its political objectives,” he said.

“We will monitor compliance with China’s September 2015 commitment to refrain from conducting or knowingly supporting cyber-enabled theft of intellectual property with the intent of providing competitive advantage to companies or commercial sectors,” he said.