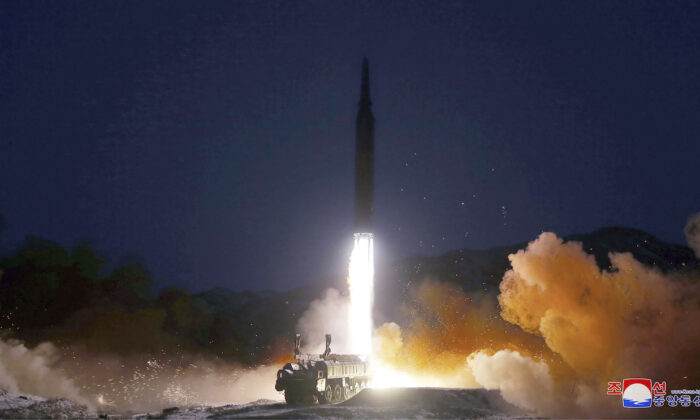 This photo provided by the North Korean government shows what it says a test launch of a hypersonic missile on Jan. 11, 2022 in North Korea. The content of this image is as provided and cannot be independently verified. (Korean Central News Agency/Korea News Service via AP)
Asia & Pacific

North Korea’s state media on Tuesday claimed the country test-fired a hypersonic missile under the watch of its leader Kim Jong-un, which it described as having “superb maneuverability” and can “precisely” hit a target 1,000 kilometers (621 miles) away.

The “hypersonic gliding warhead” made a 600 kilometers (375 miles) “glide re-leap” and then a 240 kilometers (150 miles) maneuver before it hit the target in the sea 1,000 kilometers (621 miles) away, state media Korean Central News Agency (KCNA) reported.

According to the authoritarian regime’s mouthpiece, Kim personally watched the hypersonic missile launch, and underscored the need to strengthen the country’s military capabilities, including to enhance the modernity of the army.

This marks the second reported missile launch by Pyongyang in less than a week. North Korea previously claimed it launched a hypersonic missile on Jan. 5 that hit a set target 700 kilometers (435 miles) away.

South Korea and Japan detected both of Pyongyang’s missile launches, but presumed the launches involved a possible ballistic missile—not a hypersonic missile.

South Korea’s Joint Chiefs of Staff (JCS) said it detected a possible ballistic missile being fired from the Jagang province area into the East Sea at around 7.27 a.m. on Jan. 11.

The JCS said the projectile flew at least 700 kilometers at a maximum altitude of about 60 kilometers up to 10 times the speed of sound, describing the missile launch as “more advanced” than the previous launch.

“Our assessment [of the projectile] is that it is a more improved version compared to the ballistic missile that was launched on Jan. 5,” it stated, Kyodo News reported.

Japan’s Defense Ministry said a “potential ballistic missile” was fired eastward from North Korea at around 7.25 a.m. on Jan. 11. It stated that the projectile flew less than about 700 kilometers and estimated it landed outside Japan’s exclusive economic zone, but no damage has been reported as a result of the incident thus far.

Hypersonic weapons fly towards targets at lower altitudes and can achieve more than five times the speed of sound—or about 6,200 kilometers per hour (3,850 mph). They are harder to intercept and pose a higher threat level than ballistic missiles, which fly into outer space before returning on steep trajectories.

“While we’ve assessed that this event did not pose an immediate threat to U.S. personnel or territory or to our allies, the launch highlights the destabilizing impact of the [Democratic People’s Republic of Korea]’s illicit weapons program,” Psaki said at a press briefing on Tuesday.

Talks led by the United States seeking to get North Korea to advance denuclearization—including to surrender its nuclear weapons and ballistic missile arsenal—have been stalled since February 2019; Kim and then-President Donald Trump were unable to come to an agreement over disputes about international sanctions on Pyongyang.

The Biden administration has said it is open to a dialogue with North Korea at any time without preconditions, but the authoritarian state accused the United States of having “hostile policies” such as military drills and sanctions that it must withdraw against Pyongyang before any talks can resume.

The United States recently reiterated that it holds “no hostile intent” toward Pyongyang.