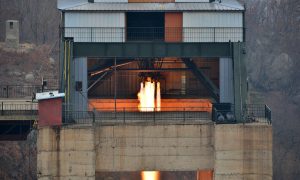 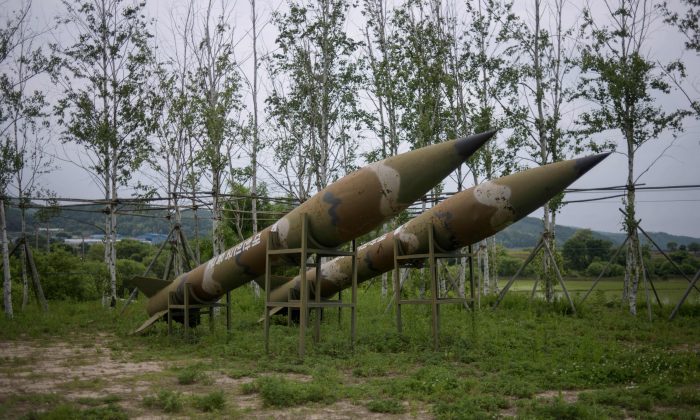 In a photo taken on May 29, 2018 rockets are displayed at a memorial ground of the Baengmagoji, or White Horse, battlefield in Cheorwon near the Demilitarized Zone (DMZ) separating North and South Korea. (ED JONES/AFP/Getty Images)
Viewpoints

Following the failed United States–North Korea summit in Hanoi, it is now crucial that Washington increases its strategic leverage in Asia by building a new force of ballistic and cruise missiles to deter both North Korean and Chinese nuclear blackmail and aggression.

President Donald Trump deserves great credit for walking away from his finely orchestrated summit because North Korean dictator Kim Jong Un, like his father Kim Jong Il, wasn’t ready to truly give up his nuclear missiles.

Trump deployed his personality and the prestige of the office of the president as none of his predecessors had to make clear the essential choice for Kim: If you give up your nuclear weapons and missiles, we can help you follow the success of summit host Vietnam, still a communist dictatorship but far more prosperous.

Trump’s summit parade contrasted sharply with former President Bill Clinton’s October 2000 dispatch of his Secretary of State Madeline Albright for the then highest-level official visit to North Korea, which turned out to be Kim Jong Il’s parade and an utter waste of U.S. prestige.

Trump kept his cool, parting with Kim on cordial terms, hoping to sustain the limited gains of the latter’s suspension of nuclear weapons and missile testing. But now that Kim has made a strong play for the dismantling of the U.S.–South Korea alliance that deters Pyongyang, we can also expect that Kim will also resume pressure tactics, such as testing his missiles that have remained under vigorous development.

It shouldn’t be a surprise that future tests of the 13,000-km (about 8,100 miles)-range Hwasong-15 intercontinental ballistic missile (ICBM) may demonstrate a new multiple nuclear warhead capability. Pakistan, Pyongyang’s missile partner, could have already transferred multiple warhead technologies tested on its Ababeel medium-range ballistic missile in January 2017.

These are liquid fuel missiles that require sophisticated transporter-erector-launchers (TELs), or many-wheeled trucks, to rapidly move these missiles to launch positions without causing damage to sensitive missile components.  North Korea’s large 16-wheel and 18-wheel TELs are made by the Sanjiang Space Group, a subsidiary of the larger China Aerospace Science and Industry Corp. (CASIC).

According to Japanese press reports, U.S. intelligence services have been monitoring the transfer of CASIC TELs to North Korea since the summer of 2011. Washington’s failure to sanction CASIC has only emboldened China; in 2013, China allowed its Sinotruk Corp. to set up a joint venture in North Korea, which is now making truck-based TELs for North Korea.

Truck-based TELs made from Sinotruk parts would be more suited to North Korea’s expected production of slightly less-sensitive solid-fuel IRBM and ICBM. In its April 2017 military parade, North Korea displayed one of its CASIC trucks with a large tube consistent with a solid-fueled ICBM.

China has repeatedly denied that it has assisted North Korea’s missiles and has shown no willingness to take back its TELs. There have also been recent suggestions that China might “hold” North Korea’s missiles as a step toward a larger settlement, and though fraught with risks, this only underscores China’s missile relationship with Pyongyang.  Perhaps it’s now time to sanction CASIC and Sinotruk and call on China to take back its missile trucks.

Given the dangers of war, Trump’s leadership engaging Kim to seek rapid nuclear disarmament has been a necessary diplomatic risk. But while remaining committed to negotiations, it’s necessary to find additional means to pressure Kim into making real concessions.

Perhaps the most effective means for building such pressure would be to use the U.S. departure from the 1987 Intermediate-Range Nuclear Forces Treaty with Russia to rebuild U.S. theater nuclear missile forces and introduce new missile-defense capabilities. The United States should now accelerate the development and production of new medium-range ballistic and cruise missiles, and new intermediate-range missiles.

The U.S. Navy should reverse the 2010 Obama administration decision to dismantle its tactical nuclear warhead-armed Tomahawk submarine-launched cruise missiles, restoring this weapon as soon as possible.

U.S. Army programs to develop new ground-based ballistic missiles should be accelerated, while programs which could arm U.S. Air Force and Navy missiles with hypersonic maneuvering warheads should also be accelerated.

Missile defense also requires the rapid formation of the Space Force division of the U.S. Air Force, to much better defend the many satellites required for the success of defensive and offensive missile operations.

Pyongyang’s refusal to dismantle its nuclear and missile weapons should also prompt Washington to approach its allies in South Korea, Japan, and Australia to offer new offensive and defensive missile capabilities that could both deter and defend against North Korean and Chinese aggression.

The same offer should be made to Taiwan, which must deter China’s growing threat of invasion and its thousands of ballistic and cruise missiles aimed at the island democracy. In the event of a new Korean War, new Taiwanese missiles could help deter China from the temptation to start hostilities against Taiwan.

A larger U.S. and allied offensive and defensive missile force will better deter North Korean and Chinese aggression, while providing pressure to increase their interest in verifiable missile reductions.

Richard D. Fisher Jr. is a senior fellow with the International Assessment and Strategy Center and is author of “China’s Military Modernization: Building for Regional and Global Reach,” Stanford, 2010.