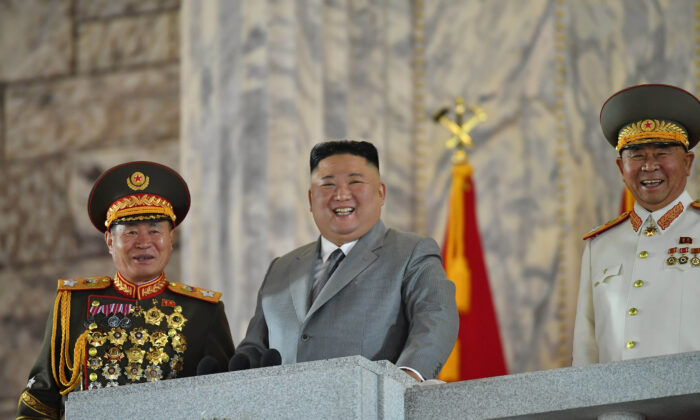 North Korean leader Kim Jong Un reacts as he attends a parade to mark the 75th anniversary of the founding of the ruling Workers' Party of Korea, in this image released by North Korea's Central News Agency on Oct. 10, 2020. (KCNA via Reuters)
Asia & Pacific

North Korea celebrated the 110th birthday of its late founder on April 15, but there was no sign of an expected military parade showcasing the country’s latest weaponry.

State media aired live footage of an evening gala in Kim Il Sung Square after sundown on April 15, although the footage gave no sign that an anticipated military parade took place.

According to the state-run Korean Central News Agency (KCNA), all the participants at Kim Il Sung “raised stormy cheers of Hurrah” when North Korean leader Kim Jong Un appeared, and fireworks were set off.

KCNA reported that phrases such as “independence in politics” and “self-reliance in defense” were displayed at the complex to symbolize the nation’s path to victory.

It stated that the festival “artistically depicted” Kim Il Sung’s native home and “the sacred mountain of revolution, Mt. Paektu.” Residents could also take photos in front of arches lit with phrases such as “Pyongyang Is Best” and “We Are the Happiest in the World.”

Pyongyang usually holds a military parade on the Day of the Sun, the birthday of its founder, Kim Il Sung, to display its new weaponry. The event on April 15 is also considered to be the most important national holiday in North Korea.

Specialist service site NK News cited on April 15 unnamed persons who claimed to have heard the sound of “jet aircraft and helicopters flying low over the city center” the day before the event.

But there was no mention in state media of a military parade happening as of the evening of April 15.

The United States and South Korea had also expected Pyongyang to mark the national event with new weaponry or engage in a provocative act by conducting nuclear tests.

The U.S. Navy reportedly deployed a nuclear-powered aircraft carrier group this week to the waters between Japan and the Korean Peninsula to reassure allies and partners of the U.S. commitment to maintaining stability in the region.

“We are worried that, in connection with the upcoming April 15 anniversary, [North Korea] may be tempted to take another provocative action. We obviously hope not, but we will be prepared,” Sung Kim, U.S. special envoy for North Korea, told reporters on April 6.

North Korea has conducted more than 10 missile tests since the start of the year, one of which involved a Hwasong-17, which experts dubbed a “monster missile” capable of striking anywhere in the United States and beyond.