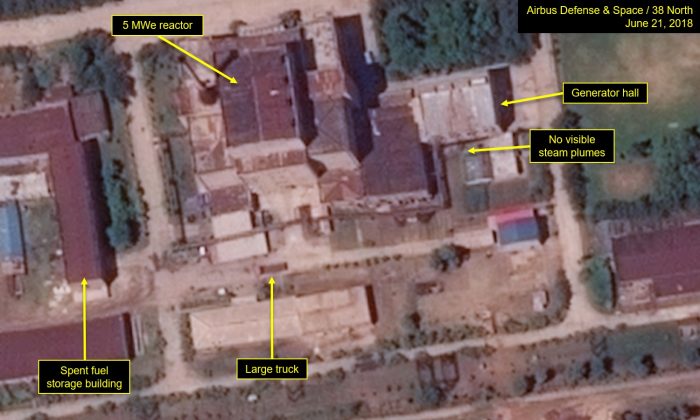 North Korea has continued to build up infrastructure around one of its nuclear facilities, according to analysis based on satellite images. This is despite the agreement signed by North Korean dictator Kim Jong Un and President Donald Trump that stated North Korea “commits to work toward complete denuclearization of the Korean Peninsula.”

The website 38 North, which provides analysis of developments in North Korea, published a report on June 26 showing that Pyongyang is rapidly building a cooling system and a new structure at the Yongbyon Nuclear Scientific Research Center.

The finding is based on analysis of commercial satellite images.

Observers including 38 North have cautioned that the continued work at the Yongbyon facility by itself is not proof that the regime has reneged on its promises made during the Trump–Kim summit in Singapore on June 12, since the agreement was only a pledge that offered no specific timeline or details.

Still, the discovery suggests that North Korea can be expected to proceed with its nuclear business as usual until concrete agreements are reached between Pyongyang and Washington.

Jenny Town, managing editor of 38 North, wrote in a tweet. “Infrastructure improvements continue at Yongbyon; underscores reason why an actual deal is necessary, not just a statement of lofty goals.”

Skeptics believe that Kim would renege on the promises made at the North Korean summit as soon as North Korea regained economic vitality following a potential lifting of U.S. sanctions. North Korea has a long record of violating agreements, such as a string of six-party talks it conducted with United States and others throughout the 2000s.

North Korean media have claimed that the process of denuclearization will be step by step and reciprocal, with sanctions coming off as progress was made, while Trump and Secretary of State Mike Pompeo have said the sanctions will remain in place until there is complete and verifiable denuclearization.