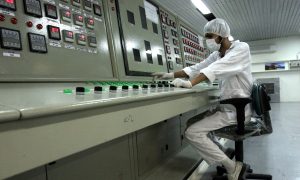 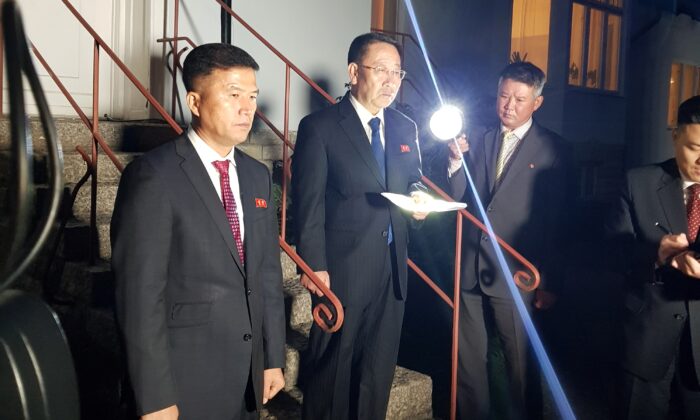 US Committed to Talks With North Korea, Proposes Accepting Sweden’s Invitation for Another Meeting

The United States is committed to “overcome a legacy of 70 years of war and hostility on the Korean Peninsula,” the state department said on Oct. 5 after resuming talks with North Korea in Sweden.

The meeting on the outskirts of Stockholm was the first working-level formal session to take place after the meeting between President Trump and Kim Jong-un at the inter-Korean border zone about 4 months ago.

Neither of the leaders was present, instead, North Korea’s chief nuclear negotiator, Kim Myong Gil, and U.S. Special Representative for North Korea Stephen Biegun held an uneventful meeting in which North Korea accused the United States of being inflexible.

“The negotiations have not fulfilled our expectation and finally broke off,” Kim told reporters through an interpreter.

“The U.S. raised expectations by offering suggestions like a flexible approach, new method, and creative solutions, but they have disappointed us greatly and dampened our enthusiasm for negotiation by bringing nothing to the negotiation table,” he said.

A State Department press release, however, said that the previously mentioned comments by the North Korean delegation “do not reflect the content or the spirit of today’s 8 1/2 hour discussion,” adding that, “The U.S. brought creative ideas and had good discussions with its DPRK counterparts.”

DPRK stands for the Democratic People’s Republic of Korea.

After the discussion, the Department of State said that the United States proposed to accept the Swedish hosts’ invitation to go back to their capital in order to further the discussions over the agreements and solve relevant problems.

It remains unclear whether Pyongyang had accepted.

The meeting came about days after North Korea had tested a ballistic missile modeled for submarine launch, an aggressive gesture that Washington had to take note of.

A State Department spokeswoman called on Pyongyang to “refrain from provocations” and remain committed to the nuclear negotiations.

South Korea’s military said it had detected the launch of one missile that flew 280 miles and reached an altitude of 565 miles. It was likely a Pukguksong-class weapon, as the North’s earlier submarine-launched ballistic missiles (SLBMs) under development were known.

First Vice Foreign Minister Choe Son Hui said on Sep. 9, that North Korea is “willing to comprehensively talk about all the issues we have discussed until now with the United States at an agreed time and place in late September,” reported the North Korea state media.

It is widely known that North Korea is seeking to have the United States make concessions and provide relief from the sanctions it imposed in exchange for limited denuclearization procedures.

“I want to believe that the United States will come up with an alternative based on a calculation method that serves the interests of both sides and is acceptable to us,” Choe said.

U.S. Secretary of State Mike Pompeo said in Athens, during the last leg of a tour of southern Europe that, “We are mindful this will be the first time that we’ve had a chance to have a discussion in quite some time and that there remains to be a lot of work that will have to be done by the two teams.”