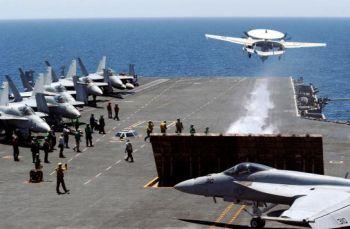 A U.S. fighter takes off from the flight deck of USS George Washington during a joint military exercises at east sea on July 26, 2010 in South Korea. (Song Kyung-Seok-pool/Getty Images)
Opinion

Cheng Jing
biggersmaller
Print
North Korean leader Kim Jong-il’s unofficial visit to China became a Xinhua headline news feature on Aug. 30, five days after his arrival. Speculation abounds that Kim's visit might be a reaction to the U.S.-South Korean joint military exercises and sanctions against North Korea, as diplomatic relations between the communist nations and South Korea and the U.S. are at an all-time low.

As Xinhua reports, Chinese regime leader Hu Jintao invited Kim for an unofficial visit between Aug. 25 and Aug. 30 to the northeastern provinces of Jilin and Heilongjiang.

Kim’s second visit to China in the past three months is unprecedented because Kim seldom leaves the country. Moreover, former U.S. President Carter arrived in North Korea on Aug. 25 to negotiate the release of an American. Kim left for China Aug. 26.

“On the surface Kim did it just to show the U.S. he did not care. In fact, Kim dares not do anything without China backing him up. North Korea’s politics, economy and military are completely dependent on China,” said Sun. He also believes Kim needs China to prop up North Korea’s poor economy, especially given the recent floods. Even as Kim crossed the China-Korea border, the North Korean media already reported that China would provide the Korean flood victims with emergency supplies.

This March, a South Korean navy ship was sunk near North Korea. An international investigation pointed the finger at the North, who promptly denied it. Soon after the U.S. and South Korea held joint military exercises in the Yellow Sea off the west coast of the Korean Peninsula, and the U.S. imposed sanctions against the North.

Kim Gat-chi, an analyst from the North Korean Research Institute in Seoul, stated that under current circumstances “China is the only country Kim can seek support from. Kim needs the support before the upcoming meeting of the Labor Party [the ruling body].”

Kim’s health has deteriorated in recent years. His third son, the 28-years-old Kim Jong-Un, lacks experience and qualifications in the Labor Party, so his influence in the party is weak. Kim’s visit to China is an attempt to gain support for his son’s status in the party, and to bring legitimacy to his son for being his successor.

Dr. Cheng Xiaohe from the School of International Studies of Renmin University, China, sees multiple reasons for Kim’s visits. The Labor Party congress, which has not been held for many years, will be held this September, and the reactivation of the Congress indicates that major leadership decisions will probably be made.

The Chinese Communist Party seems to deny that; the Beijing-controlled Global Times quoted Wang Linchang, member of Beijing funded Chinese Association of ASIA-PACIFIC Study, on Aug. 28 saying “If Kim Jong-il’s did visit China, it means North Korea trusts China. However, China will not interfere its interior affairs including the change of leader.”

It is well known that the U.S. changed its foreign policy in 2010 and intensified its relations with other Asian countries such as Indonesia, Vietnam and South Korea. Besides participating in the military exercises in the Yellow sea, the U.S. was involved in the South China Sea dispute, supporting the ASEAN against China. The U.S. conducted joint naval activities with Vietnam, to increase military ties with Vietnam; that also put pressure on China.

Sun believes that Kim’s China visit is a way of telling the U.S. that the China-North Korea ties are still solid, and that this could be a threat to the U.S. in East Asia.