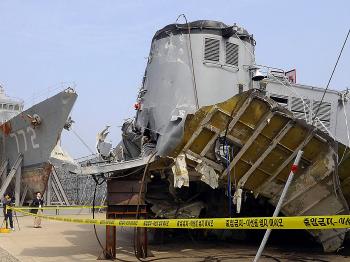 North Korea has retaliated to South Korea’s claims that their northern neighbors sank one of their warships with a torpedo.

Torpedo residue found on recovered pieces of the ship were linked to North Korea, which sparked an investigation—the findings were released by South Korea on May 20, local time.

The North Korean spokesman for the North Korean Defense Commission released a statement Thursday saying, “Our army and people will promptly react to any ‘punishment’ and ‘retaliation’ and to any ‘sanctions’ infringing upon our state interests with various forms of tough measures including an all-out war.”

The statement, which was broadcast on Korea News Service, continues, “The all-out war to be undertaken by us will be a sacred war involving the whole nation, all the people and the whole state for completely eliminating the strongholds of the group of traitors who orchestrated ‘the conspiratorial farce’ and ‘charade’ and their followers and building instead a reunified power in which the whole nation emerges powerful and prosperous."

The South Korean warship Cheonan was sunk on March 26 in the Yellow Sea, just off the coast of South Korea, killing all 46 crew members on board.

Researchers from Britain were part of the investigations, and British officials have condemned the attack. "(North Korea's) actions will deepen the international community's mistrust. The attack demonstrates a total indifference to human life and a blatant disregard of international obligations," said Foreign Secretary William Hague, according to the British Embassy.

The U.S. also condemned the attack. According to a May 19 White House statement, the investigation “points overwhelmingly to the conclusion that North Korea was responsible for this attack. This act of aggression is one more instance of North Korea’s unacceptable behavior and defiance of international law.”

“This attack constitutes a challenge to international peace and security and is a violation of the Armistice Agreement,” the statement adds.

North Korea is accusing the investigations of being “based on a sheer fabrication,” and “joined by the U.S. and Japanese aggressors who are making desperate efforts to keep their hostile policy toward the DPRK on its orbit.”

According to the statement, North Korea will dispatch an inspection group and the “group of traitors” will need to provide them with evidence that the North is responsible for the attack.

The statement continues that sanctions, punishment, or retaliation for the attack will result in “all-out war,” and North Korea “will brand any small incident that occurs in the territorial waters, air, and land where our sovereignty is exercised including the West Sea of Korea as a provocation of confrontation maniacs and react to it with unlimited retaliatory blow, merciless, strong, physical blow.”

Of note, threats such as this are common from the North Korean communist regime. In March 2009 it also vowed to wage war if Japan attempted to shoot down its long-range missile, which it claimed was a satellite.

In December 2008 North Korea threatened to turn South Korea into “a sea of fire” if there were any attacks against it. In October 2008 in response to leaflets against North Korea distributed near its border, the North threatened an “advanced pre-emptive strike,” which would be "unimaginably more powerful than nuclear weapons."