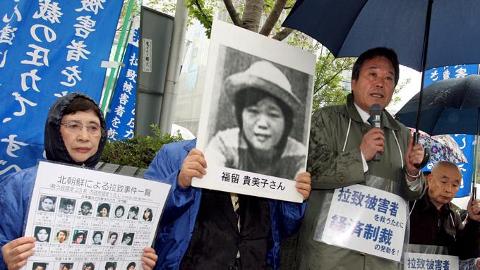 After a three day summit in Sweden, North Korea agreed today to reopen an investigation into what happened to Japanese citizens who were kidnapped decades ago, marking a potential breakthrough in a long-standing dispute between Tokyo and Pyongyang. In exchange, Japan agreed to remove certain sanctions against North Korea once the probe reopened, and may consider providing humanitarian aid if the investigation progresses at a reasonable pace. This breakthrough is actually a major victory for Prime Minister Shinzo Abe, who at one point staked his international credibility on the North Korea abduction issue.

In 2002, North Korea (for some reason) admitted to kidnapping Japanese citizens in the late 1970s and early 1980s in order to train more effective spies. Five abductees were repatriated, but the remaining eight were dead, according to Pyongyang. But Japan pressed for more information about their deaths, and were not happy with the information they received. In the 2000s, many people in Japan believed that the abductees were still alive, including Abe.

During the six party talks with North Korea in 2007, Abe insisted that North Korea supply information about the17 Japanese citizens allegedly kidnapped by the North decades ago. Abe refused to discuss any improvement in relations until it received answers, effectively derailing talks. This policy obsession was of the utmost importance to Abe — probably because he was using the abductees to rally his dwindling support back home at the time.

“I discussed this matter on the phone with President Bush,” defended Abe in a 2007 Washington Post interview. “To the extent that the issue remains unresolved, there will be no normalization of diplomatic relations between Japan and North Korea, and therefore there will be no attainment of the objectives of the Six Party Talks.”

Abe went on to explain that all the participating countries in the Six Party Talks understood that if there is no progress on the abduction issue, Japan will not participate in energy assistance for North Korea.

Despite having the “understanding” of participating countries, Tokyo was able to piss off a lot of people for pulling this stunt, further tarnishing Japan’s image on the world stage. The international community looked at Japan as the spoiler of the negotiations, basically obstructing the six party talks for something petty. The Washington Post even called out Abe’s hypocrisy over his stance on abductees. While he fervently fought for something to be done about a dozen Japanese citizens who were abducted in the 70s and early 80s, he denies that his country did the same sort of thing in South Korea and other countries in Asia during World War II. This was just one of the many 2007 Abe gaffs that eventually led to his resignation in 2008.

So the recent success by Tokyo in Sweden over the weekend is likely a big boost to Abe’s ego. He had fought for the issue tooth and nail in the past, and if he is anything like me then he is probably patting himself on the back and draining a few glasses of sake [picture below is of Abe partying this weekend].

But what are the chances of Pyongyang carrying through with faithfully investigating the Japanese abductees? They had lied about it in the 2000s, so there is a high probability that this will fall through.

That being said, this is still a big step forward for relations between North Korea and Japan. Ever since Kim Jong-un took over for his father, North Korean relations with the rest of the countries in the region have been terrible. Hopefully Pyongyang will keep their word and other countries will have similar diplomatic breakthroughs like Abe.