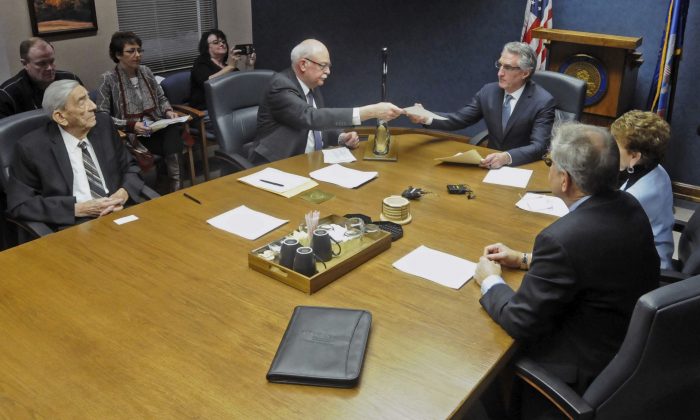 The task was duplicated in state capitols across the nation as Electoral College members gathered to vote for Trump or Hillary Clinton. Some Trump opponents have responded to his November victory by trying to persuade Electoral College voters to break with the results in their state.

North Dakota has three of the 538 votes in the Electoral College, which elects the president and vice president of the United States. North Dakota’s electors are John Olson of Bismarck, Beverly Clayburgh of Grand Forks and Duane Mutch of Larimore. They were chosen for the job at the state Republican convention last spring.

In presidential elections, voters actually cast ballots for a slate of “electors,” rather than the presidential candidates themselves. Electors are then expected to support their party’s candidate during Electoral College balloting.

The electors said in interviews with The Associated Press that they had gotten hundreds of messages — mostly emails and form letters from California and New York — urging them to switch their vote for president.

Olson, a lawyer former state senator, said he had received more than 600 letters over the past six weeks, and some of the messages were printed on Christmas cards.

Clayburgh said she got more than 200 anti-Trump letters on Saturday, of which only two were from North Dakotans.

“I opened all of them because I figured if they spent the money on a stamp, I should at least scan them,” said Clayburgh, a Republican activist, who served for more than a decade on the state Board of Higher Education, which oversees 11 colleges in North Dakota’s university system.

Mutch, 91, was elected to the North Dakota Senate in 1958, when Dwight D. Eisenhower was president. He served during 23 legislative sessions.

Mutch described the task of voting for Trump as an “absolute honor.”

During the 17-minute Electoral College meeting Monday, Olson, Clayburgh and Mutch marked separate ballots for Trump and his running mate, Mike Pence. The three electors had to sign their names several times as a procession of envelopes and voting certificates were put in front of them.

Republican Gov. Doug Burgum, who took office last week, presided over the ceremony attended by about two dozen people, most of whom are party faithful or members of the governor’s staff.

A man and a woman held signs to no avail during the meeting in the governor’s conference room, asking that the electors “Vote your conscience” and one that said “Trump lost the popular vote.” The couple quickly left the meeting after the proceedings.

Since North Dakota became a state in 1889, Republican candidates have swept its electoral votes in all but six presidential elections. No Democrat has carried the state since Lyndon B. Johnson in 1964.