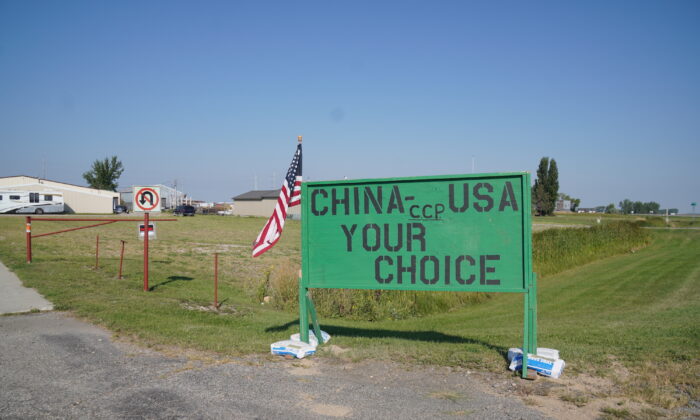 A sign opposing a corn mill in Grand Forks, N.D., stands near 370 acres recently annexed by the city for the project. Many residents don't want the project in the city because the owner, Fufeng Group, has reputed ties to the Chinese Communist Party through its company chairman. (Allan Stein/The Epoch Times)
US

GRAND FORKS, N.D.—One by one, residents opposed to a corn mill investment by a Chinese company with reputed ties to the Chinese Communist Party (CCP) through its chairman, got up to chastise the mayor and City Council of Grand Forks, North Dakota.

“You guys are the scariest people I know,” said Dennis Kadlec, an outspoken critic of the project. “You are willing to endanger this city, the people, the country, and this nation.”

He believes city officials have ignored residents’ concerns over the project and the flag they serve.

“This is a republic. Please treat it as such,” Kadlec said.

Kadlec’s accusations of inaction and secrecy on the part of city officials seemed to resonate with other concerned citizens at the Sept. 6 council meeting.

The group views the corn mill as a potential Chinese spying operation, as well as a threat to the environment and municipal resources.

Some residents see divisions over the project worsening in the close-knit agricultural community of 56,000, where sugar beets and wheat—not corn—are king.

The city of Grand Forks isn’t a significant producer of corn, either, straddling the Minnesota border about 75 miles south of Canada, where winter temperatures can drop to well below zero.

So the question arises: Why would a Chinese company build a corn mill in Grand Forks when harvest volumes are so low?

Critics who fear Chinese espionage say one needs to look no further than the Grand Forks Air Force Base, about 12 miles away. The base stores and tests the U.S. military’s sensitive drone, satellite, and surveillance technology.

However, city officials supporting the corn mill see the project as an economic opportunity that’s too good to pass up. As the most significant single capital investment in the city’s history, it promises 230 permanent high-paying jobs, higher corn prices for regional growers, and other long-term benefits.

Fufeng USA, the American subsidiary of Fufeng Group, wants to build on the 370 acres it acquired, which would add millions in sales and property tax revenues and improve city infrastructure.

The “wet corn” mill would employ thousands of workers during construction and, in operation, extract ingredients used to produce animal feed products for sale in the domestic market.

At least on paper, the project looks and sounds good.

What doesn’t sit well with project opponents is that the parent company, Fufeng Group, is based in Shandong Province in China. The company has reputed links with the CCP through its chairman and controlling shareholder, Li Xuechun.

Many residents opposed to the corn mill also believe city officials have been opaque in moving the project along, voting to annex land to sell to Fufeng USA without proper notice to abutting businesses.

Some residents have felt so neglected by the local powers that Jodi Carlson and several others recently formed the Concerned Citizens of Fufeng Project in Grand Forks.

The public group, which has nearly 3,000 followers on Facebook, vehemently opposes the corn mill project.

Group meetings have become “very contentious,” Carlson told The Epoch Times, “primarily because we’re just tired. The city council continues to say they’ve answered our questions and haven’t. We still have a lot of questions.”

One question is what Fufeng USA plans to do with 250 acres not listed in the development plan, Carlson said.

“We don’t know what’s going to happen with that. We think we have a right [to know], especially since it’s a foreign interest. We don’t think [the city council] vetted it properly. We have a lot of concerns.”

Both U.S. senators who represent North Dakota have voiced their concerns about potential national security issues surrounding the Fufeng USA project, at a time when tensions are growing between the United States and China over Taiwan.

As a result, the Committee on Foreign Investment in the United States (CFIUS), an interagency panel overseen by the Treasury Department in business matters involving national security, has stepped in to review the project proposal.

Grand Forks city officials announced the land deal with Fufeng in November 2021 and approved the development agreement in July. The city then changed the land designation to an industrial zone from agricultural to allow the project to go forward under federal law.

“We don’t want [the mill]. We don’t want it here in Grand Forks,” said Concerned Citizens group member Frank Matejcek, a retired farmer who lives next door in rural Falconer Township, which has a population of 140 and where the city of Grand Forks has annexed some 40 businesses.

Some residents are concerned the mill will divert limited municipal resources. In its current design, the corn mill would draw roughly the same amount of water—more than 6 million gallons—that the city consumes daily from the Red River.

“What’s it going to be in a couple of years? We had to ration water last year” during a drought, Matejcek said.

“These city officials claim that the town will die if we don’t do this project. That’s a bunch of [garbage]. We’ve got plenty of agriculture. There is the North Dakota mill—North Dakota Mill and Elevator—the biggest flour mill in the world.”

Al Nieuwsma, the owner of Al’s Diesel Injection and a Falconer Township resident, said the city annexed his business property to make way for the corn mill project.

He said his property taxes are now six times what he previously paid, including municipal fees.

He considers the Fufeng project “a bad deal” all around.

“I wouldn’t put anything past China. But for me—right here—it’s too close. The pollution—the stink, the traffic, the [depletion of] resources—terrible.

“I’ll tell you what, it should never have happened. If I had known more about this [project] earlier, I would have done more to prevent it from happening.”

“I do not want [Fufeng USA] in our town—I don’t want them in our country. For one, I do not want a Chinese communist company here. You’ve got to be smart enough to know that. Water pollution—you name it. There are tons of reasons,” she told The Epoch Times.

The CFIUS review appears to be the final hurdle for Fufeng before it can begin construction in 2024 or 2025, at a total projected cost of about $350 million.

The question is whether CFIUS has the legal authority to perform the review. The law firm representing Fufeng believes the land acquisition through annexation doesn’t amount to a business purchase, and therefore, it doesn’t fall under CFIUS’s legal jurisdiction for review.

Still, the CFIUS review could take months to complete if the committee moves forward. In the meantime, CFIUS requested more time and information from Fufeng before deciding whether to conduct the review.

Despite the delay, most of the Grand Forks City Council voted on Sept. 6 to approve various projects relating to a stormwater pond and water main construction design along three main highways.

At the meeting, Carlson and several other citizen group members criticized city officials openly for their alleged lack of transparency.

“We hear lies about the equipment, the water—lies about a lot of stuff. When does the truth start?” Carlson asked the council.

Addressing the seven-member council, Michael Coachman shared how one city official accused him of “undermining the republic” for asking questions about the project.

“How am I threatening the republic? I’m asking questions dealing with the Constitution,” he said. “Everything I am doing is based on what you are doing.”

Another concerned citizen, who asked to remain anonymous, said she fears military surveillance by the Chinese government, using Fufeng as a shell company.

“I’m afraid of them accessing our infrastructure on all levels. The development agreement gives them access to our water, power, air, and roads. They’re giving them access to everything.”

While it’s “always nice for a city to make more money,” she told The Epoch Times, “we are not hurting in the city.”

“There’s a misallocation of resources,” she said. “The problem with the city is not that they don’t have money; it’s the mismanagement of it. Corn doesn’t grow here. Sugar beets grow here. There’s a little corn, but it’s not ideal conditions.”

Before finalizing a development agreement, however, Bochenski advised in the letter to “keep the information out of the public, for the time being, we need to finalize the details.”

Ward 2 City Council member Rebecca Osowski told The Epoch Times that she agrees that the land annexation took place without proper notice and that the project lacks transparency.

“I am against the project and do not vote to support the infrastructure items until things have been settled,” Osowski said.

The six other city council members didn’t respond to a request for comment.

Bochenski, a Republican, acknowledged that public opposition to the project is based on environmental concerns, questions regarding land annexation, and the “overall deterioration of the relationship between the U.S. and China over Taiwan.”

“The city council and I have shared similar concerns and set forth a development agreement to study these concerns, which has been ongoing for 10 months,” Bochenski said in an email to The Epoch Times. “The city requested Fufeng to voluntarily submit [to] the Committee on Foreign Investment in the United States (CFIUS), which reviews national security concerns.”

CFIUS’s findings should come in the next few months, and only design work can take place before then, “which is at the financial risk of Fufeng,” the mayor added.

Bochenski said the former land owners requested the annexation of land, which followed requirements set by the state of North Dakota.

“As to the unfounded personal attacks, that is the nature of politics these days, unfortunately,” Bochenski said.

At the Urban Stampede coffee shop in downtown Grand Forks, Jim and Rex were having a friendly game of backgammon and talking about local affairs.

“Everybody spies on everyone else,” said Jim, a self-described capitalist who isn’t worried about the proposed corn mill being owned by a Chinese company.

The upshot is that the mill would “help bring manufacturing jobs to the area and process the corn to a usable product,” he said.

Despite much consternation over the purported lack of transparency related to the project, Rex said, “this has been one of the most transparent things, [and] the city council has done a good job explaining what they’re doing every step along the way.”

“As long as you read the newspaper and follow the [city] website—if you don’t know what’s going on, it’s your fault,” he said.