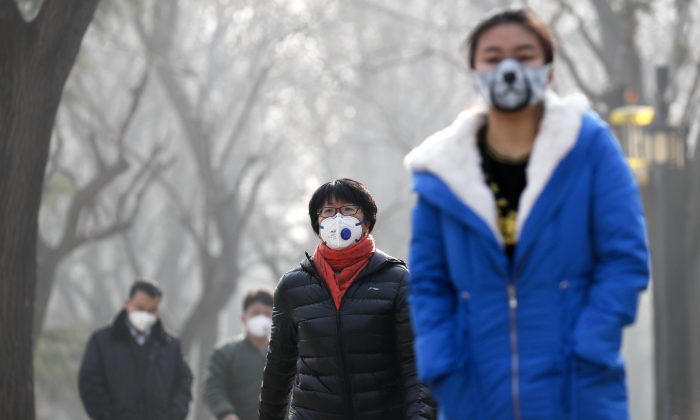 BEIJING—Engulfed in choking smog, some northern Chinese cities limited the number of cars on roads and temporarily shut down factories Monday to reduce air pollution during a national “red alert.”

More than 700 companies stopped production in Beijing and traffic police were restricting drivers by monitoring their license plate numbers, state media reported. Dozens of cities closed schools and took other emergency measures after a “red alert” was issued from Friday night to Wednesday for much of northern China.

“The smog has serious repercussions on the lungs and the respiratory system, and it also influences the health of future generations, so under a red alert, it is safer to stay at home rather than go to school,” said Li Jingren, a 15-year-old high school student in Beijing.

Authorities in the northern province of Hebei ordered coal and cement plants to temporarily shut down or reduce production. Elsewhere, hospitals prepared teams of doctors to handle an expected surge in cases of pollution-related illnesses.

China’s air pollution is blamed on its reliance on coal and emissions from older cars.

“If you are tracking back to the first day of this episode, you can see that the layer of the smog (in Beijing) is moving slowly from the south to the urban area in Beijing and then to the north,” said Dong Liansai, a climate campaigner with Greenpeace in Beijing. “You can easily find the large deployment (of smog) in the regions south of Beijing.”

Dong said emissions from factories in nearby provinces were the main cause of the smog choking the capital.

The smog had earlier grounded flights in some cities and closed highways due to low visibility.

Members of the public closely watch levels of PM2.5, particles measuring 2.5 microns across that are easily inhaled and damage lung tissue.

The alert, this winter’s first, lasts through Wednesday. Red is the highest level on the four-tier system prescribing actions taken to reduce the smog.

Authorities in Jinan, south of Tianjin, raised that city’s alert to the second-highest level Sunday after the city “basically disappeared” in the haze, the newspaper Jilu Evening News reported. Photos on its website showed downtown office towers as ghostly silhouettes at midday.

Beijing and other cities have tried to improve air quality by switching power plants from coal to natural gas and rolling out fleets of electric buses and taxis.