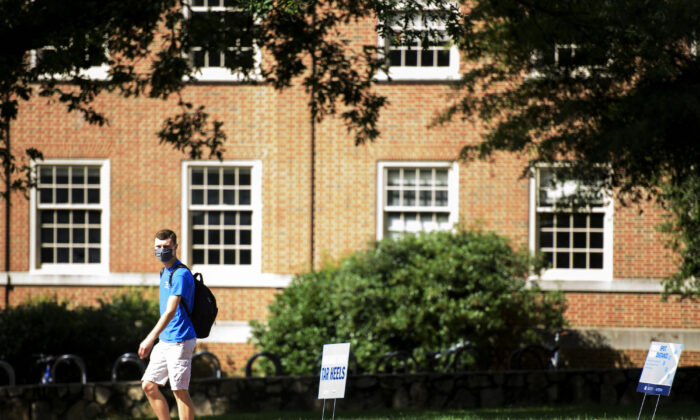 A student walks through the campus of the University of North Carolina at Chapel Hill in Chapel Hill, N.C., on Aug. 18, 2020. (Melissa Sue Gerrits/Getty Images)
Regional News

The University of North Carolina at Chapel Hill said that Tuesday classes were canceled for its 30,000 students after police investigated a possible suicide and an attempted suicide over the past weekend.

In a statement, UNC Chancellor Kevin Guskiewicz, without elaborating, said the school is in a “mental health crisis” and that “we are aware that college-aged students carry an increased risk of suicide.”

“This crisis has directly impacted members of our community—especially with the passing of two students on campus in the past month. As chancellor, a professor and a parent, my heart breaks for all those whose suffering goes unnoticed,” he wrote.

Guskiewicz said he would create a support network starting Tuesday, drawing on resources from the school’s Counseling and Psychological Services (CAPS), Department of Psychiatry and School of Medicine, and School of Social Work.

“Classes will be canceled. I encourage every student to use this time to rest and to check in with each other during that day. Reach out to a friend, a classmate, or colleague and ask them, ‘honestly, how are you doing?’” Guskiewicz also said. “Faculty, staff, students, and campus leaders must work together to address this national crisis,” he added.

The school’s police department’s crime log showed investigators received a call for an attempted suicide at Granville Towers South around 3 a.m. Sunday as well as the death of a student living in Hinton James Residence Hall a day before that, according to local reports.

Suicide is the second leading cause of death for people between the ages of 10 and 34, according to the U.S. Centers for Disease Control and Prevention (CDC). The agency noted that due to COVID-19 pandemic lockdowns, suicides are on the increase.

A landmark UK study earlier this year found that five times more children committed suicide than died of COVID-19 during the first year of the pandemic.

But the study concluded that “the risk of removal of CYP (children and young people) from their normal activities across education and social events may prove a greater risk than that of SARS-CoV-2 itself,” using another name for the CCP (Chinese Communist Party) virus.

Only 25 children under the age of 18 died of COVID-19 from the start of the pandemic until the end of February 2021, they found. During the same time period, there were approximately 124 suicides among children and another 268 deaths from trauma, the study authors found.

The University of North Carolina at Chapel Hill has about 30,000 undergraduate and graduate students.