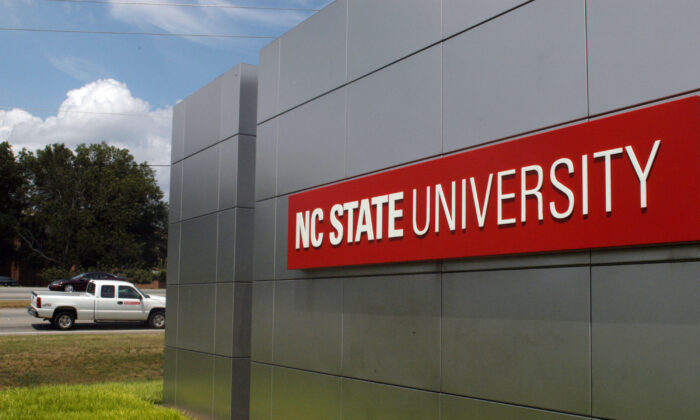 Based on the allegation that a “woke mob” within his faculty discriminated against him, a North Carolina State University (NCSU) professor filed a civil suit (pdf) on Sept. 14 in federal court against the college’s board of trustees.

Stephen Porter, the plaintiff, is a professor at NCSU in Raleigh, North Carolina, where he has alleged that the college’s 13-member board of trustees infringed upon Porter’s freedom of expression, violating both his First and Fourteenth Amendment rights by retaliating against his free speech.

Porter was hired as a tenured professor in the Department of Educational Leadership, Policy, and Human Development (ELPHD) in 2011.

Joy Gaston Gayles, the senior advisor for Advancing Diversity, Equity, and Inclusion; and Penny Pasque, a professor in the Department of Educational Studies, are also named as defendants.

In response to Porter’s questioning of social issues, the lawsuit alleges that the defendants “have intentionally and systematically excluded him from departmental programs and activities that are necessary for him to fulfill his job requirements, effectively hollowing his job out from the inside.”

According to the lawsuit, the defendants deliberately have intended “to set the stage for his eventual termination.”

“While the structures of the plaintiff’s academic department—and thus, the details of the adverse employment actions taken against him—is complex, what is happening is quite simple: Defendants are gradually forcing plaintiff into what is effectively a ‘rubber room’ in retaliation for his criticisms of the so-called ‘social-justice’ ideology that now prevails both in his department and in academia more broadly,” the lawsuit alleges.

The lawsuit states that Porter had been outspoken in questioning what he called harmful agendas that Porter said further “a highly dogmatic view of ‘diversity,’ ‘equity,’ and ‘inclusion.’”

Porter alleged that Danowitz “was instrumental” in removing him from his “departmental program area in retaliation for his protected speech” before assigning him a fifth course to teach as a punishment.

Gayles excluded him from doctoral events and activities “critical to the fulfillment of his job duties” before developing the Higher Education Opportunity, Equity, and Justice program, from which Porter said he was not included, a move that was intended to later edge him out of the ELPHD program altogether.

Lee “systematically excluded” Porter from meetings and activates related to higher education programs and the advising of students, Porter said, which prevented him from getting new advisees.

Much of the contention between Porter and his co-workers centered around opinions expressed in Porter’s blog, Porter said.

“I’m a political conservative who has no problem taking a stand and expressing my opinion, which is why I have, for years now, been targeted by the woke mob at NC State,” Porter wrote in his blog on why he filed the lawsuit, adding that he will begin blogging about the details leading up to the lawsuit, which go back several years.

The Epoch Times reached out to NC State University for a response to Porter’s lawsuit, but it did not immediately respond.