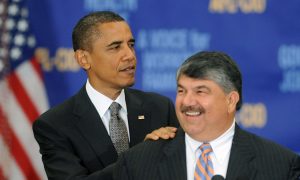 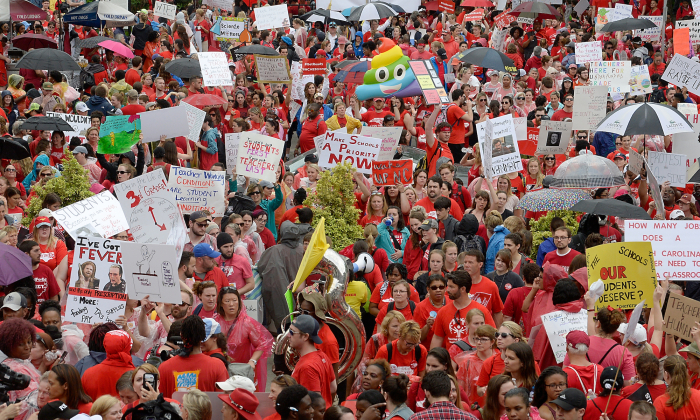 Crowds fill Bicentennial Plaza outside of the North Carolina Legislative Building during the March for Students and Rally for Respect on May 16, 2018 in Raleigh, North Carolina. (Sara Davis/Getty Images)
US

The four largest school districts in North Carolina canceled their May 1 classes because many of their teachers will be flocking to the state’s capital for a May Day protest.

May 1, or May Day, was chosen as the International Workers Day by socialists and communists.

The Raleigh News and Observer reported earlier in April that the number of employees taking a day off for the protest is so high that they’ve canceled classes. Other districts are staying open, asking that a small delegation travels to the protest instead.

“We don’t think it’s appropriate or healthy to keep hundreds of thousands of students out of the classroom, especially when education funding is at a historic high and teacher funding has increased at the third-highest rate in the entire country,” Pat Ryan, a spokesman for state Senate leader Phil Berger, told the Observer.

The May Day protest is organized by the Red for Ed movement, which is a headed by Noah Karvelis, a 24-year-old socialist in his second year as a teacher in Arizona. Karvelis spoke at the Socialism 2018 conference last year.

The Red for Ed movement is coordinated and funded by the largest labor union in the United States, the National Education Association (NEA). Red for Ed is coordinating strikes and protests across the nation.

According to a Breitbart News expose, the movement is specifically targeting swing states with the goal of electing a Democratic president in 2020.

Teachers’ unions overwhelmingly advocate for causes that have little or nothing to do with improving student performance. Red for Ed is specifically focused on raising teacher salaries.

Red for Ed has coordinated large-scale protests in West Virginia, Kentucky, Oklahoma, Colorado, Arizona, and North Carolina, according to the NEA. The organization is also supporting 1,500 educator candidates running for public office.

The NEA donated $19.4 million to elected officials in 2017–2018, with the vast majority of the money going to Democratic and liberal officials, according to Open Secrets.

The NEA used to openly recommend books written by Saul Alinsky to “every organizer & anyone contemplating action in their community.” Alinsky, who authored the book, “Rules for Radicals,” was an activist who embraced elements of socialism, Marxism, and fascism, among other radical theories.

While the total cost of K-12 public school education has nearly tripled since 1970, average math, reading, and science scores have remained virtually unchanged, according to the Cato Institute.

President Donald Trump and his allies have cast the 2020 election as a choice between socialism and freedom. All of the leading candidates in the crowded Democratic field support the Medicare for All policy introduced by Sen. Bernie Sanders (I-Vt.), a self-described socialist.

In a blog post, a teacher activist calling on others to join the May Day protest didn’t disavow either socialism or communism.

“There’s a lot of ugly rhetoric about Communists and far-left agendas beginning to circulate around May 1. Haters gonna hate,” Justin Parmenter, a teacher in the Charlotte-Mecklenburg district, wrote in a blog post.