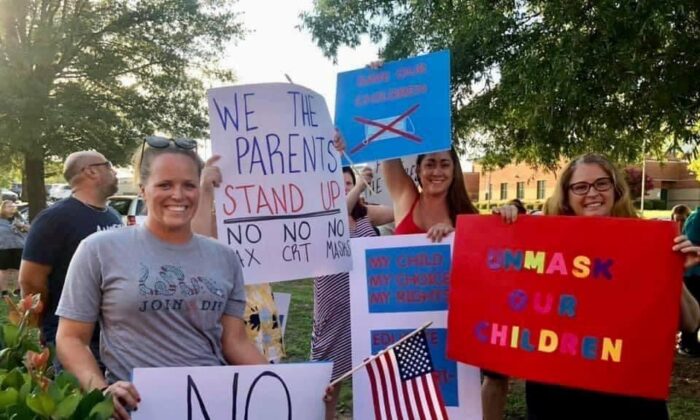 NCSBA’s separation follows the South Carolina, Ohio, and Missouri School Board Associations’ cutting ties from the NSBA after its Sept. 29 letter to the White House comparing parents to domestic terrorists.

Union County Public Schools Board Chair Melissa Merrell was on her way to an NCSBA convention when she received an alert from the NCSBA announcing its separation.

“It was a pleasant surprise,” Merrell told The Epoch Times. “I definitely did not see this coming. I’ve had a couple of board members who had been requesting and sending emails to the NCSBA asking if it were going to withdraw our membership from the NSBA, and they (the NSBA) had asked for our feedback, and then, on the way to the convention, we saw this message.”

Merrell said nothing was mentioned at the convention about the NCSBA’s departure from the national board.

According to Parents Defending Education (PDE), an organization that investigates indoctrination in schools, as of Nov. 9, 26 states have distanced themselves from the NSBA after the letter.

The NSBA, which represents more than 90,000 school board members and 14,000 public school districts in the United States, had written a letter to President Joe Biden asking that the parents who have protested COVID-19 restrictions and the teaching of critical race theory in public schools be regarded as domestic terrorists that should be investigated by agencies such as the U.S. Department of Justice and the FBI.

This led to Attorney General Merrick Garland’s Oct. 4 memorandum to the FBI directing the agency to work with U.S. attorneys to “facilitate the discussion of strategies for addressing threats against school administrators, board members, teachers, and staff, and will open dedicated lines of communication for threat reporting, assessment, and response.”

“The September 29 letter from NSBA to President Biden, in both its inflammatory language and the request for federal agencies to intervene in our communities, was just one in a series of lapses in governance,” said NCSBA President Amy Churchill in a press release. “NCSBA shares its members’ concerns about safety at school board meetings. As a proponent of local control, NCSBA believes that local law enforcement is in the best position to respond to those concerns and seek outside assistance if necessary.”

On Oct. 22, the NSBA issued an apology, stating that “there was no justification for some of the language included in the letter.”

The PDE requested statements from 47 states affiliated with the NSBA, and reported that the Alabama Association of School Boards (AASB) said it “has withheld its dues to join the NSBA for the current membership year, though AASB’s bylaws require it to be an NSBA member.”

According to the PDE, the AASB said it would be voting in December on changes to its bylaws that would give the AASB board of directors authority to determine its membership with the NSBA.

The PDE said it received no response from the Massachusetts Association of School Committees (MSCA), prompting the PDE to file a public record request for emails “to get a sense of their position.”

“It turns out that Glenn Koocher, executive director of the MSCA, was so happy about the letter that he put it in an email to NSBA CEO Chip Slaven,” the PDE said.

“We in MASC are all very happy that the NSBA has reached out to the FBI and, based on local coverage, has been identified as a key agent for generating federal support,” Koocher said in the email.

“NSBA has labeled parents as domestic terrorists, with no evidence to justify that term,” the House Republicans wrote in a letter to the SCSBA executive director. “The reality is that parents and stakeholders are beyond frustrated being ignored and left out of decisions with their child. The NSBA is detached from reality and fails to recognize that Americans are angered by what is happening in our classrooms.”

SCSBA Executive Director Scott Price told The Epoch Times that the decision to separate from the NSBA was “aimed at protecting our membership from fallout from NSBA’s September 29 letter.”

“Any pressure that SCSBA was under stemmed primarily from our desire to keep this from impacting our members (local school boards),” Price said.

The NSBA did not respond immediately to a request for comment.

GQ Pan and Ivan Pentchoukov contributed to this report.