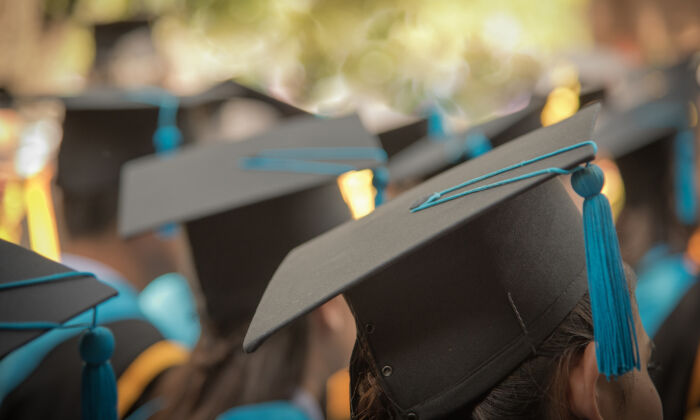 High School graduates at a graduation ceremony in a file photo. (Shutterstock)
US News

A school board in North Carolina has voted to host an in-person graduation ceremony for all its high schools, a decision that would be in conflict with Gov. Roy Cooper’s restriction on public gatherings.

In a 5-4 vote, the Union County Schools Board of Education approved on Thursday a proposal to hold the graduation ceremony in an outdoor stadium, reported CBS affiliate WBTV. Graduating seniors from all 11 high schools and a limited number of family members would celebrate together, while maintaining social distancing rules.

The ceremony would exceed North Carolina’s current limit on the number of people allowed at gatherings. Under Phase 2 of Cooper’s three-phased plan for reopening the state, gatherings are limited to no more than 10 people indoors and 25 people outdoors.

“Obviously we have a terrible lack of leadership from the governor of our state,” school board member Gary Sides told WBTV. “We’re trying to fumble through and not deprive these kids of one of the most important events of their life.”

Another board member, Joseph Morreale, said he didn’t agree with the governor’s orders, but maintained that people should honor them.

“I’m not willing to sit in jail to host a traditional graduation,” he said. In North Carolina, violating the state order is a misdemeanor punishable by nearly two months in jail and a $1,000 fine.

The school board’s attempt to defy state orders comes as Cooper faces growing pressure demanding him to speed up the reopening process, including from President Donald Trump, who gave him a week to lift mass gathering restrictions all together or risk losing the Republican National Convention scheduled for Charlotte this August.

Trump, noting that Cooper is a Democrat, wrote on Twitter that Cooper is “still in Shutdown mood & unable to guarantee that by August we will be allowed full attendance in the Arena.”

“They must be immediately given an answer by the Governor as to whether or not the space will be allowed to be fully occupied,” he wrote. “If not, we will be reluctantly forced to find, with all of the jobs and economic development it brings, another Republican National Convention site.”