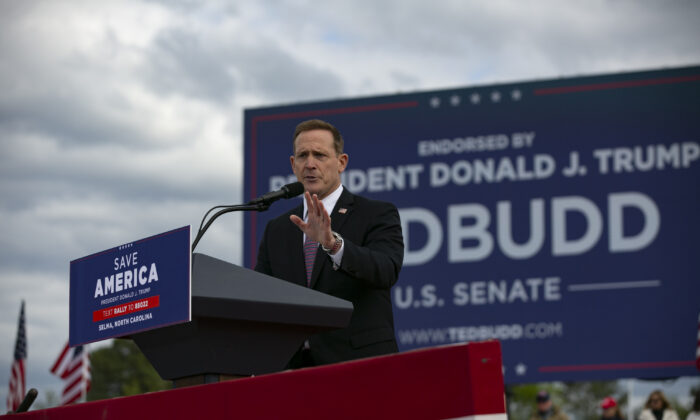 Ted Budd, who is running for U.S. Senate, speaks before a rally for former U.S. President Donald Trump at The Farm at 95 on April 9, 2022 in Selma, North Carolina. (Allison Joyce/Getty Images)
2022 Midterm Elections

North Carolina’s Democratic and Republican voters on May 17 will choose their respective nominees for a vacant U.S. Senate seat, setting up what might prove one of the closest races in the fall midterms.

Budd’s campaign platform focuses on conservative policies such as securing the border, cutting government spending, and First Amendment and culture war issues. He has the endorsement of former President Donald Trump, the GOP’s de facto leader.

So far, the campaign between McCrory and Budd has been filled with insults, out-of-context campaign ads, and accusations of being insufficiently conservative.

Meanwhile, while Walker is unlikely to win, his candidacy may divide voters who were otherwise likely to vote for Budd. Walker received the offer of a Trump endorsement if he backed out of the Senate race and ran for the House; he declined.

That might tip the race toward McCrory, a less Trump-dependent candidate than Walker or Budd.

On the Democratic side, Cheri Beasley, a former state Supreme Court chief justice who would be the state’s first black U.S. senator if she’s elected in November, is that party’s presumptive nominee.

Beasley supports Obamacare, gun control, citizenship for illegal immigrants, a higher minimum wage, cutting 50 percent of carbon emissions in the next eight years, higher restrictions on police use of force, and nationwide abortion on demand at any stage of pregnancy.

Polling suggests that voters prefer Beasley to McCrory by 5 percentage points in a head-to-head matchup in the general election, but Budd over Beasley by 7 points.

Early polls suggest that Republicans have a good chance of taking the majority in the U.S. Senate in the 2022 midterm elections, needing a net gain of one seat this fall to reclaim control of the chamber.

However, the GOP may face as many electoral challenges as it does electoral opportunities. More Republican senators are up for reelection this year than Democratic ones. Moreover, the leak of a Supreme Court draft opinion that suggests the court may be poised to overturn the 1973 Roe v. Wade decision on abortion has invigorated Democratic voters.

Among races for U.S. House seats, the GOP will have to win in the highly competitive 13th Congressional District to send the same number of party representatives to Congress as last year. There, candidates Kelly Daughtry and Bo Hines compete for the Republican nomination; Daughtry leads in campaign funds raised, although Hines has been endorsed by Trump.

The 11th Congressional District GOP primary may be worth watching. Incumbent Rep. Madison Cawthorn, 26, was elected in 2020 as the youngest congressman since 1965.

A charismatic speaker and pro-Trump culture warrior, Cawthorn is currently leading in polls over his strongest Republican opponent, Chuck Edwards, by 17 percent, although an 11 percent drop since the previous poll. Cawthorn also has Trump’s endorsement; Edwards has the backing of Republican Sen. Thom Tillis, the state’s junior senator.

Recently, multiple incidents have erupted involving Cawthorn that have alienated him from members of his own party. He’s been accused of sexual misconduct, photographed wearing women’s lingerie, detained for attempting to bring a gun into an airport, and accused of insider trading.

Even if he wins the primary, the allegations against Cawthorn might hinder him in the general election against Jasmine Beach-Ferrara, the leading Democratic primary rival.

Beach-Ferrara is a pro-abortion Democrat who supports lowering vote security measures, increasing government funding for education, and raising the minimum wage to $15 an hour.