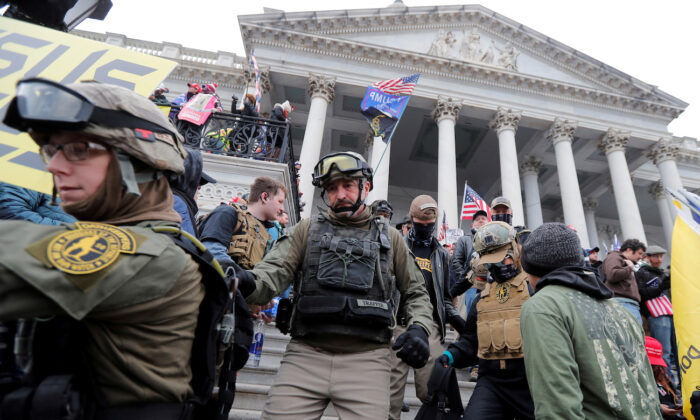 Jessica Marie Watkins (Left) and Donovan Ray Crowl (Center), march down the East front steps of the U.S. Capitol with the Oath Keepers in Washington, Jan. 6, 2021. (Reuters/Jim Bourg)
US News

A North Carolina member of the Oath Keepers pleaded guilty May 4 to seditious conspiracy and obstruction of an official government proceeding, one day after he was charged with two felony counts stemming from the Jan. 6, 2021, unrest at the U.S. Capitol.

Up to 78 Months in Prison

Wilson faces up to 20 years in prison for the two felony counts. Under sentencing guidelines that reflect his cooperation with prosecutors, his prison time is estimated at between 63 and 78 months, according to the plea agreement.

He’s free on personal recognizance. No sentencing date has been set. An update hearing was scheduled for Aug. 19.

According to the statement of offense, Wilson entered the Capitol at 2:34 p.m. on Jan. 6 through the Upper West Terrace doors.

By 2:38 p.m., he “marched through the Rotunda to the east side of the Capitol, where he joined in the center of a mob of people trying to push open the Rotunda Doors from inside the building,” the U.S. Department of Justice said in a statement.

There was no indication in the criminal complaint or the DOJ statement that Wilson was responsible for the inner Rotunda doors being opened. It was the second time that afternoon that the doors were opened from the inside. The first time, a door was opened by a protester.

Wilson filmed some of the other Oath Keepers who entered the Capitol through the Columbus Doors, prosecutors said. He exited the Capitol at 2:55 p.m., having spent a total of 21 minutes inside the building.

Wilson said while he was in a private suite at the Phoenix Park Hotel in Washington, at about 5 p.m. on Jan. 6, he heard Oath Keepers founder Elmer Stewart Rhodes III call an unnamed individual and “repeatedly implore the individual to tell President [Donald] Trump to call upon groups like the Oath Keepers to forcibly oppose the transfer of power,” the statement of offense alleged.

The individual denied Rhodes’s request to speak directly with Trump, the document alleges. After the call, Rhodes told the group in the hotel suite, “I just want to fight,” prosecutors said.

The DOJ said that at a restaurant meeting later on Jan. 6 in Vienna, Virginia, Wilson was advised to delete any potentially incriminating material from his phone. Prosecutors said he took steps to conceal evidence from being uploaded from his phone to his Apple iCloud account and later tossed his phone into the Atlantic Ocean.

Prosecutors said Wilson and other alleged co-conspirators used the encrypted messaging app Signal to communicate plans in the weeks leading to Jan. 6. In a post on Dec. 14, 2020, Wilson wrote, “It’s time to fight!” prosecutors said. On Dec. 30, he wrote: “Things are about to get real! I believe the [expletive] is about to hit the fan, and we need to be as ready as ever!”

Wilson drove to the Washington area on Jan. 5. He brought an “AR-15-style” rifle, a 9 mm pistol, 200 rounds of ammunition, body armor, a camouflage uniform, pepper spray, and “a large walking stick intended for use as a weapon,” the DOJ statement said.

Wilson stayed at a Virginia hotel with other members of the Oath Keepers. Prosecutors said he didn’t take the firearms to the Capitol but did have a pocket knife on him.

“In advance of January 6, Wilson on multiple occasions heard Rhodes discuss the potential need for Rhodes and co-conspirators to engage in force, up to and including lethal violence, in order to stop the transfer of power,” according to the statement of offense Wilson signed. “With this understanding, Wilson agreed to take part in a plan developed by Rhodes to use any means necessary, up to and including the use of force, to achieve this objective.”

Rhodes has insisted the Oath Keepers were in Washington to provide security for speakers and VIPs scheduled to appear at protest rallies near the Capitol. He said there was no conspiracy or plan to attack the Capitol.

Weapons and ammunition were brought to the Virginia hotel in case Trump enabled the Insurrection Act and lawfully called up a militia to defend the White House from Antifa attacks, Rhodes told The Epoch Times in a March interview. Rhodes had publicly advocated for Trump to invoke the Insurrection Act.

Rhodes said he believes the DOJ put heavy pressure on Oath Keepers member Joshua James, 34, of Arab, Alabama, to get him to plead guilty in March to seditious conspiracy.

“That was the only deal they would accept because that’s what they want … to create a false crime and to create a false witness,” Rhodes said. “And that’s why they finally indicted me, because they got someone to agree to testi-lie. That’s the only reason I was indicted. For an entire year, they had nothing on me. So go find something and make something.”

On April 29, Oath Keepers member Brian Ulrich, 44, of Guyton, Georgia, pleaded guilty to seditious conspiracy and obstruction of an official proceeding. Ulrich, James, and Wilson are expected to cooperate with the government’s ongoing investigation of the Oath Keepers.