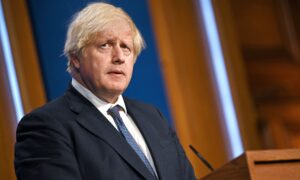 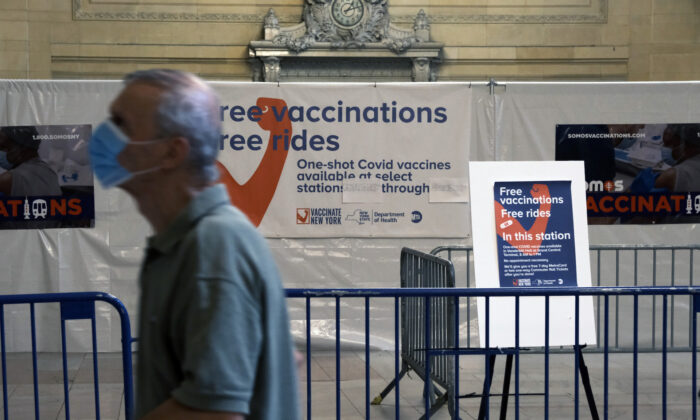 Citing a resurgence of COVID-19 cases due to the Delta variant and “the unvaccinated,” North Carolina Gov. Roy Cooper has issued vaccine mandates for state employees and state-run medical facilities.

On July 29, the North Carolina Department of Health and Human Services (NCDHHS) said in a press release that state government employees are required to show proof of vaccination status and urged private businesses to enforce the requirement as well.

If an employee hasn’t been vaccinated, he or she must wear a mask, be tested once a week, maintain six feet of distance from others, “not gather with other unvaccinated people who do not live with them,” and not travel.

On July 27, the Division of State Operated Healthcare Facilities, which operates within the NCDHHS, issued a mandate requiring employees of state-run health care facilities to be fully vaccinated against COVID-19 by Sept. 30 or face disciplinary action.

In a press release, North Carolina House Speaker Tim Moore (R-Cleveland) said, though he’s been vaccinated, he doesn’t support the mandate, calling the decision to be vaccinated a “personal one and should be made between a doctor and a patient.”

“North Carolinians will not be bullied into being vaccinated against their will, particularly with a vaccine that has yet to be approved by the FDA,” Moore said in the press release. “Our healthcare workers are certainly capable of weighing the risks and benefits and can make their own decision about the vaccine. This mandate could force healthcare workers to choose between their employment and their conscience. Now is not the time to risk losing any of our healthcare workers who have been at the front lines of this pandemic.”

According to NCDHHS’ COVID-19 dashboard report on Aug. 2, there were 2,190 newly reported cases, 1,359 currently hospitalized, and 13,670 total deaths in North Carolina.

The dashboard also reports that 61 percent of the adult population has had one dose of the vaccination, and 58 percent have been fully vaccinated.

In addition to its mandates, the NCDHHS, using the Centers for Disease Control and Prevention’s (CDC) updated guidelines, recommends that North Carolina K-12 schools require staff, teachers, and students to wear masks, “regardless of vaccination status,” though each school district can decide if students and staff will be required to wear masks.

Data collected by the North Carolina School Board Association (NCSBA) tracks which schools are implementing either mandatory or optional mask policies.

The Charlotte-Mecklenburg Board of Education voted 8-1 in favor of mask mandates for its K-12 school system on July 30.

“If I look at the DHHS numbers, hospital admissions average 2.3 percent of children under the age of 17, which comes out in actual numbers as two admissions a day,” said Sean Strain, one board member who voted against the mandate. “Now that’s two more than I wish it were, he said in the meeting, but my question is: what problem are we trying to solve? If we are trying to solve the pandemic of the unvaccinated adults by imposing restrictions and constraints on our unvaccinated and unvaccinated children who are not at risk, I have an issue with it.  Then this recommendation is not for the health and safety of our students and staff. It’s a public health community action that actually is not targeting a significant risk, because the significant risk is not born out by the data.”

Other schools school board members cited NCDHHS, the American Academy of Pediatrics, the CDC, and the Mecklenburg County Public Health, echoing recommendations by those organizations that said all individuals in a K-12 setting should wear face masks indoors.

On June 1, the Union County Board of Education in Monroe, North Carolina, according to the NCSBA, approved a resolution to request that Cooper rescind his executive order regarding mask wearing in schools and direct the NCDHHS to update its public health toolkit.

In addition, the board voted to ask Cooper to not require school employees or students to receive a COVID-19 vaccination prior to attending school, and if Cooper does mandate masks and vaccines, the board agreed to ask that the North Carolina General Assembly intervene with legislation to prevent the mandates.

At the Charlotte-Mecklenburg school board meeting was Moms for Liberty, a parental rights organization protesting the K-12 mask mandate.

Brooke Weiss, chairwoman for the Mecklenburg County chapter of the national nonprofit, told The Epoch Times that the vote wasn’t a surprise, but that they still wanted to have a presence.

The rights of the parent are being eroded, she said, adding that it’s the job of the parents to raise their kids, not the schools.

Weiss started the Moms for Liberty chapter in North Carolina after seeing her daughter’s homework assignment that had a question comparing slavery to the holocaust.

“It was a holocaust minimizing question,” Weiss said. “We are a Jewish family, so I didn’t appreciate them basically saying that slavery was worse because white people in America did the same exact thing to black people that the Nazis did to Jewish people.  Slavery was an atrocity, as the holocaust was, but they don’t need to be compared, because slavery was not the calculated murder of six million people.”

The curriculum resembled other curriculums parents had reported that that reflected the teachings of critical race theory (CRT), a teaching based on the Marxist concept of class struggle, pitting two social classes—the bourgeoisie and the proletariat—against each other.

CRT uses this framework, but replaces the bourgeoisie with white people, and the proletariat with black people, or the oppressor and the oppressed, respectively.

It took her two weeks to see more of the test that was administered, though she never got to see the entire curriculum, she said.

Among the causes for which Moms for Liberty says it fights are individual medical rights, such as the wearing of masks in schools.

Weiss said she hasn’t seen any evidence that masks work, she said.

“There are no studies, and if there are studies, they aren’t scientific studies because there is no control group,” Weiss said. “They are not comparing their findings to groups that aren’t wearing masks.”

Weiss clarified that Moms for Liberty is not an anti-vaccine group and they do not deny that COVID-19 is serious.

“We just think that it should be up to individuals as far as making their own medical decisions,” Weiss said.

The Pandemic of the Unvaccinated

Both President Joe Biden and Cooper fortified the narrative that the current resurgence of COVID-19 has been caused by the unvaccinated.

“Look, the only pandemic we have now is among the unvaccinated,” Biden said on July 16 to a reporter at the White House.

Cooper said at a news conference on July 29, “Unvaccinated people are driving this resurgence and getting themselves and other people sick.”

Leslie Manookian, president and founder of the Health Freedom Defense Fund (HFDF), told The Epoch Times that she believes that the unvaccinated are being blamed for the Delta variant “in order to hype up peer pressure on the vaccinated and to marginalize them into submission.”

The HFDF is a health rights advocacy group active in legal fights against government overreach.

After HFDF filed a lawsuit against a school district in Los Angeles for mandating vaccines last year, the school district retracted its vaccine mandate the next day, Manookian said.

Manookian said HFDF has several lawsuits addressing government overreach of mask and vaccine mandates in airports and other travel hubs, and a lawsuit against a major university that has mandated vaccines.

Manookian said, after having spoken with several physicians, what she has been told is that the Delta variant is 99 percent the same as COVID-19, and while it may be more contagious, it is less virulent, “as is the case as most viruses evolve and spread through the population.

As far as whether masks work, Manookian said, the narrative has become not scientific, but political.

“There is some very definitive research showing that masks do not stop the spread of viruses such as SARS-doc-2 or flu,” Manookian said. “In the spring of May 2020, the CDC published a review of 10 randomized controlled trials evaluating the impact of masks on the spread of flu, and they found that there was negligible impact. It’s important to remember that randomized controlled trials are considered one of the gold standards in science. Amazingly, CDC published a study, then completely disregarded it and recommended that people wear masks.”

Because the virus can be spread via aerosols and the gaps in the masks are 1,000 to 5,000 times the size of the particles of the virus, she said, the argument that the masks stop visible droplets does not consider what is microscopic, leaving the argument for wearing masks even less valid.

“But there’s also the psychological and emotional impact that masks have on children, and how they impede them from developing,” Manookian said. “Children learn how to read people, how to form words and speak, how to give cues to others through their faces and others faces, and we are preventing that from happening.”

Despite other studies within the CDC and internationally that show masks are ineffective, she said, the CDC has continued to advise people to wear masks, creating two narratives: one from people who do their own research, and the other from people who listen to the state narrative of federal health agencies as projected by the legacy media outlets.

“This can only be explained by the politicization of science,” Manookian said.