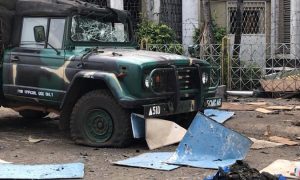 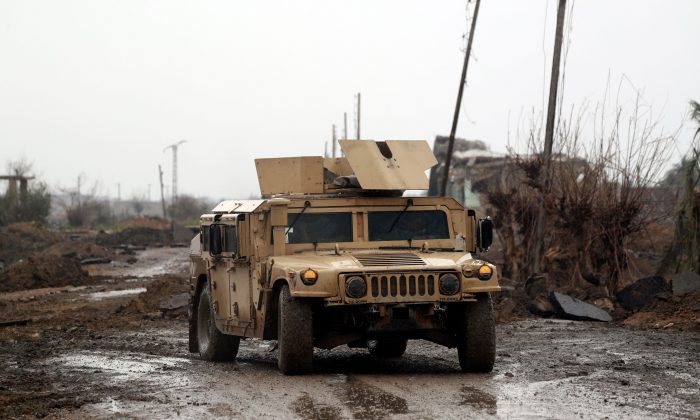 Syrian Democratic Forces (SDF) vehicles make their way on a dirt road on Jan. 28, 2019, in the town of Sousa, in Syria's eastern province of Deir Ezzor. (DELIL SOULEIMAN/AFP/Getty Images)
Crime and Incidents

A North Carolina man has been sentenced to 15 years in prison for attempting to provide material support to the ISIS terrorist group.

“This defendant posed a very real threat to the safety of our community and nation,” said Herdman.

In many ways, the case is symbolic of the ongoing terror threat as outlined by FBI Director Christopher Wray in October.

Speaking before the Senate Homeland Security and Governmental Affairs Committee, Wray warned that homegrown violent extremists, or HVEs, are “the greatest terrorism threat to the homeland.”

“These individuals are global jihad-inspired individuals who are in the U.S., have been radicalized primarily in the U.S., and are not receiving individualized direction from foreign terrorist organizations. We, along with our law enforcement partners, face significant challenges in identifying and disrupting HVEs,” Wray said.

A leading factor in homegrown radicalization is the worldwide proliferation of the internet and social media, which have changed the nature of the post-9/11 terror threat.

“Due to online recruitment and indoctrination, foreign terrorist organizations are no longer dependent on finding ways to get terrorist operatives into the United States to recruit and carry out acts of terrorism,” Wray said.

According to court documents, Hendricks is a U.S. citizen who became radicalized online and attempted to recruit and train others to commit jihad, all while living in the United States.

Hendricks admitted his goal was to create a sleeper cell that would be trained and housed at a secure location, and conduct attacks on vulnerable Americans. He claimed to have 10 recruits when arrested.

Hendricks planned to target members of the U.S. military whose information had been released online by ISIS, and an activist named Pamela Geller.

Geller, who is culturally liberal, is an abrasive critic of Sharia law. She organized a “Draw the Prophet” cartoon contest in Garland, Texas, in 2015, creating the controversial free-speech event after a Danish newspaper cartoon sparked widespread protests and violent riots across Europe and the Middle East in 2005.

Simpson and Soofi, both U.S. citizens, arrived at the Curtis Culwell Center, the contest’s venue, and opened fire. The attackers were killed in a shootout with police, but not before wounding an unarmed security guard.

According to court documents, Hendricks also had been unwittingly communicating via social media with an undercover FBI employee who was supposed to film the attack as it happened so it could be posted on social media. “If you see that pig [Geller] make your ‘voice’ heard against her,” he said.

ISIS went on to claim responsibility for the Garland plot, which was the first time the terror group took credit for an attack on U.S. soil.

Separately, Hendricks was connected to another man, Amir Al-Ghazi, who was arrested in Ohio in June 2015, after attempting to purchase an AK-47 assault rifle and ammunition a month after the Garland shooting.

Al-Ghazi had pledged allegiance to ISIS on social media and made statements “expressing interest” in conducting attacks inside the country, records show.

Hendricks had connected with Al-Ghazi over social media to recruit him in the spring of 2015, with Hendricks allegedly telling him that he “needed people” and that there were several “brothers” in Texas and Mexico.

Their plan was to train together, but first, Hendricks tested Al-Ghazi on his religious commitment to “jihad,” his willingness to die as a “martyr,” and his desire to enter “jannah,” or paradise.

Al-Ghazi is now serving 16 years in prison after pleading guilty to attempting to provide material support for ISIS, and for being a felon in possession of firearms.

According to the FBI, the internet and social media have allowed international and domestic terrorists to “gain unprecedented, virtual access” to people living in the United States.

ISIS, more so than any other foreign terror group, encourages sympathizers to carry out simple attacks against so-called soft targets, or unprotected people and places, and to travel to ISIS-held territory in Iraq and Syria.

The Epoch Times contacted the FBI for current information about the scope of the issue, but didn’t immediately receive a response. However, Wray told NBC News in March 2018, that the agency had more than 3,000 open terrorism investigations.

The FBI’s Joint Terrorism Task Force is a major aspect of the agency’s counterterror and national security activities. It’s comprised of members of the FBI, Department of Homeland Security and Investigations, U.S. Customs and Border Protection, and members of local law enforcement.

In January, the JTTF made 15 major announcements, with seven of them involving domestic terrorism linked to ISIS and Al Qaeda.

As recently as Jan. 30, an Ohio man named Damon M. Joseph, also known as Abdullah Ali Yusuf, was charged with attempting to provide material support to ISIS, in addition to attempting to commit a hate crime and possessing firearms in furtherance of a crime of violence.

Joseph had planned to conduct a mass-casualty attack on a synagogue in Toledo, Ohio.

“This man allegedly spent months planning a violent terrorist attack on behalf of ISIS here in the United States, and targeted a Jewish synagogue in the Toledo area specifically because of the faith of the people who worship there,” Herdman said.

“We will work to identify and arrest anyone who take steps to use violence to spread their ideology and to interfere with the free exercise of our essential rights,” he said.