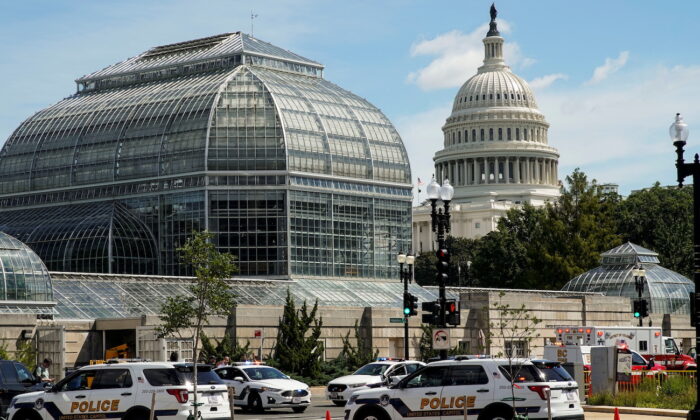 U.S. Capitol Police vehicles and other emergency vehicles respond as police investigated reports of a suspicious vehicle near the U.S. Capitol in Washington, on Aug. 19, 2021. (Elizabeth Frantz/Reuters)
Crime and Incidents

Floyd Ray Roseberry pleaded not guilty in federal court on Wednesday to charges of threatening “use of weapons of mass destruction” and “threats to use explosive materials.”

“The court found him competent to go forward with proceedings and he was arraigned on an indictment returned last week,” Bill Miller, the public information officer for the U.S. Attorney’s Office for the District of Columbia, told The Epoch Times.

A grand jury returned an indictment of Roseberry on Sept. 14.

From Grover, North Carolina, the 49-year-old defendant was reported to have a bipolar disorder being treated with ineffective medication.

Magistrate Judge Zia Faruqui ruled that a new treatment that had been prescribed within the month since the incident happened was proving effective, allowing Roseberry to stand trial.

Roseberry was taken into custody on Aug. 19, after claiming that he had a bomb in his truck parked outside the Library of Congress at the U.S. Capitol in Washington.

In a press release, the USCP said that Roseberry had said he had a bomb, and that one officer “noticed what appeared to be a detonator in the man’s hand.”

“Officers delivered him a phone in hopes of trying to continue the dialogue,” the USPC said.

According to an Aug. 20 affidavit (pdf) signed by Brandon Camiliere, a special agent with the FBI, Roseberry live-streamed video through his Facebook account.

As nearby buildings were evacuated, Roseberry communicated through hand-written signs on a dry erase board through the front, driver-side window.

Partial messages written on the board were: “please don’t shoot the windows the vibe will explode the bomb,” “I have no control of it,” and “decimals [sic] is what sets off not me,” according to Camiliere.

Roseberry eventually got out of the truck to surrender and was taken into custody at 2:15 p.m.

Camiliere said that the ”old metal can” Roseberry was observed holding “appeared to have been fashioned into an explosive device.”

“The can was old and rusted and had approximately 1 to 2 inches of an unknown powder in the bottom of it,” Camiliere said. “A fabricated trigger was attached to the top of the can. The can was sent to an FBI laboratory for further examination.”

Roseberry remains detained pending the next court date, a status hearing set for Oct. 8, according to Miller.