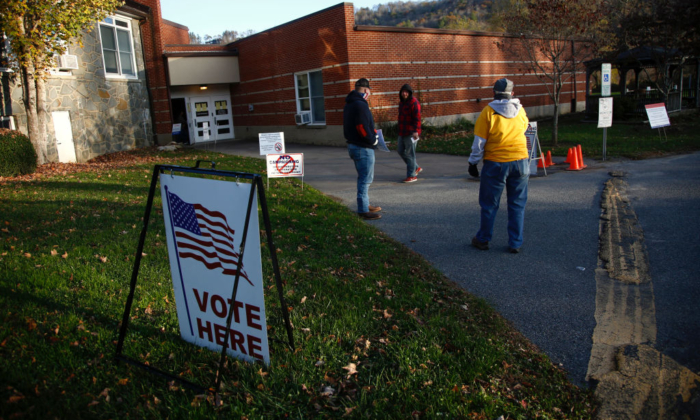 A voter makes his way into a polling place to cast his ballot in the early morning at the Valle Crucis School on Nov. 3, 2020, in Sugar Grove, N.C. (Brian Blanco/Getty Images)
US News

“Get out and vote” is an exhortation that Garbant Piquant of Garner, North Carolina, took seriously. Records show that the 53-year-old Bahamas native has voted in every primary and general election from 2018 through 2020.

He was arrested on Dec. 9 and charged with falsely claiming to be a U.S. citizen in order to register to vote, voting by an alien, and passport fraud.

According to a Dec. 13 statement by Michael Easley, U.S. Attorney for the Eastern District of North Carolina, when Piquant applied for a renewal of his U.S. passport, the Virginia birth certificate he had earlier used to establish his American citizenship aroused suspicion.

An investigation by the Department of State Diplomatic Security Service discovered that the birth certificate had never been issued by the state of Virginia.

A birth record for Piquant was found on file in the Bahamas. He had used his fraudulently obtained passport to apply for an enhanced driver’s license, also known as Real ID, according to Easley.

According to the North Carolina Department of Motor Vehicles website, under the federal Real ID Act, that card enables the bearer to enter secure federal buildings or board a commercial airliner.

If convicted, Piquant could face between one and 10 years in federal prison and fines of up to $250,000.

“We’re glad indictments are coming down. They are overdue. This needs to happen in other states,” J. Christian Adams, of the Public Interest Legal Foundation (PILF), told The Epoch Times.

The foundation recently sued the state of North Carolina to gain access to voting records, an effort that Adams believes brought light to the issue and helped bring about the indictment.

Adams cited California as another state where aliens are voting in elections and provided a document illustrating the problem.

He said the practice “dilutes” the vote of every U.S. citizen.

“Everyone should agree that aliens and dead people should not remain on voting rolls for years,” Adams said.

“When an alien wants to become a naturalized U.S. citizen, one of the required forms asks ‘Have you ever registered to vote?’

“If the answer is ‘yes,’ the form says that he must request his state of residence to remove his name from the voting rolls,” Adams said.

“Election offices around the country are flooded with such requests.”

The foundation has obtained some voting applications of aliens who truthfully answer that they aren’t U.S. citizens, but are registered to vote anyway.

“This action on the part of government puts these people in great legal jeopardy,” Adams said.

“Some may call it intentional cheating. I think a lot of it is sheer laziness and incompetence.”