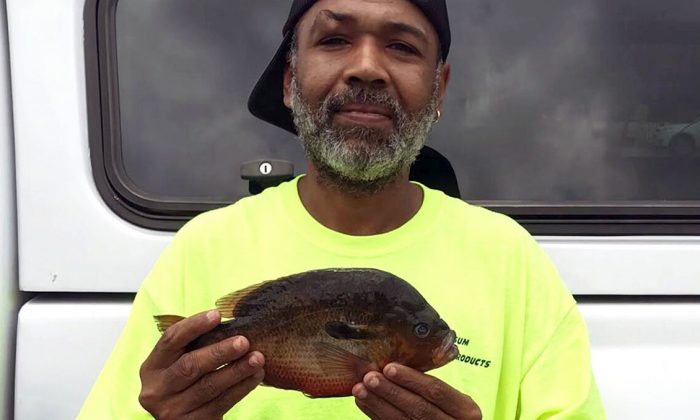 Jackson said he made the catch not long after deciding to return to where his father taught him to fish.

“We started fishing in a pond but weren’t having any luck, so I said to my kids, ‘Let’s go back to where I learned how to fish’ and this is what we caught,” Jackson said in a statement.

He used a cricket as bait and caught the sunfish, which defeated Stanley’s epic Bladen County catch by 5 ounces, according to the scales at Safeway Market in Maxton.

No, Climate Change Is Not Reducing Global Fish Catch

Jackson credited his father, Johnny Jacobs, for passing on his fishing spot along the Lumber River.

Jackson admits he is an avid fisherman and his passion stems from Jacobs who taught him how to fish when he was a child. Jackson has shared his passion with his children, aged 23, 18, and 17, who also witnessed his big catch.

The North Carolina Wildlife Resources Commission confirmed any fish considered for the North Carolina Freshwater Fish State Record must be caught with a cane pole or rod and reel, weighed on a scale certified by the state’s Department of Agriculture, witnessed by another observer, and identified by a fisheries biologist from the commission.

“Congratulations to Maxton resident Alphonso Jackson, who broke a 36-year-old freshwater fish state record on June 10 after landing a 2-pound, 1 ounce redbreast sunfish from the Lumber River in Wagram,” the commission said on Facebook.

Those who do not qualify to break a state record can still receive another form of recognition from the commission.

A Huge, Strange-Looking Fish Washed up on a California Beach. Scientists Say It’s a First

“For anglers who catch a redbreast sunfish that does not quite measure up to this latest record-breaker but is 11 inches or longer or weighs 1 pound or more, the commission has a redbreast classification for its North Carolina Angler Recognition Program (NCARP),” the commission said in a statement. “NCARP officially recognizes anglers who catch trophy-sized freshwater fish that do not qualify for a state record with a certificate featuring color reproductions of fish artwork by renowned wildlife artist and former commission Fisheries Biologist Duane Raver.”

According to Fox News redbreast sunfish are commonly found throughout North Carolina and tend to be smaller in size and weigh much less than Jackson’s catch. The commission describes redbreast as a brightly colored fish that typically lives on a diet of snails, clams, shrimp, crayfish, and more.