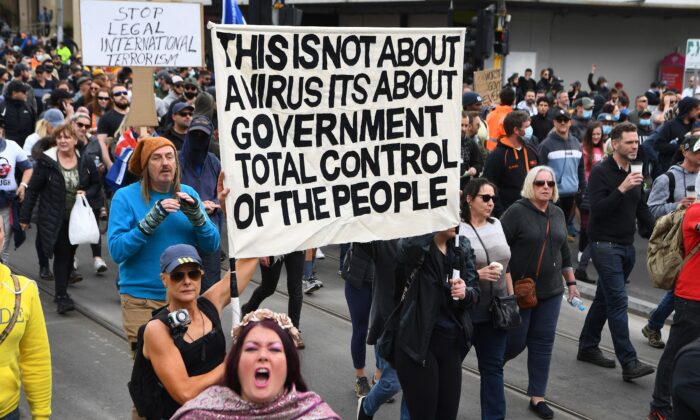 Demonstrators march through the streets to protest lockdowns in Melbourne, Australia, on Sept. 18, 2021. (William West/AFP via Getty Images)
Regional News

The North Carolina House of Representatives gave final approval to a bill that proposes to restore checks and balances on Gov. Roy Cooper’s executive powers during an extended emergency.

The Emergency Powers Accountability Act (EPAA), or House Bill 264, would require Cooper to get “concurrence of the Council of State” before “exercising certain authorities.”

The Council of State consists of bipartisan senior executive offices such as the Lieutenant Governor, Attorney General, Agriculture Commissioner, and the Secretary of State.

The bill would create a definition for the concurrence of the Council of State under the EPAA, which would clarify how Cooper proceeds in seeking concurrence before acting.

According to Republican House Speaker Tim Moore, North Carolina has remained in a perpetual state of emergency for 589 days “with no end in sight.”

Cooper declared a state of emergency in response to the pandemic in March 2020, a decision that heralded a year of lockdowns throughout the state and country.

“During the pandemic, our governor ignored his statutory duty to seek the concurrence of the bipartisan Council of State before declaring a state of emergency,” Moore said in a press release. “The need for checks and balances is arguably most crucial during a statewide emergency. No one individual should have the ability to exercise unilateral power during such an emergency.”

Republican Rep. Keith Kidwell, one of the bill’s sponsors, said the bill will address the “endless duration of power” that Cooper “has been granted” during a “self-declared and boundless state of emergency.”

Republican House Majority Leader John Bell, another sponsor of the bill, criticized what he said was a lack of oversight that allowed Cooper to declare and extend the state of emergency without input from the Council or the General Assembly.

“No one person, regardless of party, should have the unilateral authority to shut down the state for an indefinite amount of time,” Bell said. “This legislation is not about politics or what the governor has or has not done. It is about clarifying the law to restore checks and balances.”