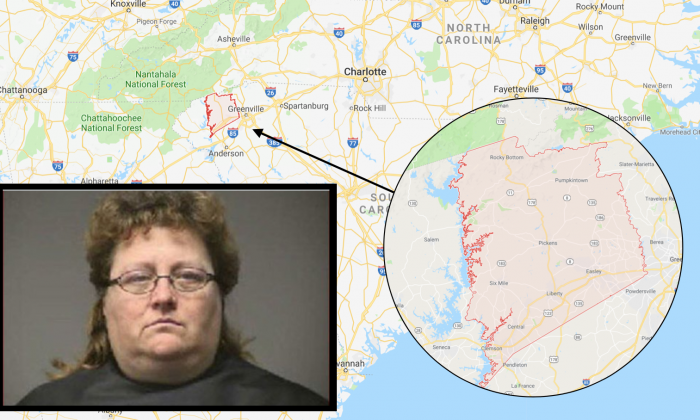 Angela Denise Brewer, 46, was found guilty of homicide by child abuse. She gave an opioid drug to her infant grandson, a North Carolina court found on Thursday, Dec. 14. (PCSO/Screenshot via Google Maps)
Crime and Incidents

A 46-year-old North Carolina woman accused of killing her 14-month old grandson by putting a lethal dose of an opioid narcotic into the toddler’s sippy cup was convicted and sentenced on Thursday, Dec. 14, WSPA reported.

Angela Denise Brewer, of Pickens, North Carolina, was found guilty of homicide by child abuse at a trial by jury in Pickens County.

The woman’s sentencing is the culminating step in a process that began with deputies responding to a call on Oct. 17, 2014, that a child had allegedly stopped breathing.

Deputies found the 14-month-old infant at a home at Swiss Entrance in Pickens. According to WYFF, a family member was trying to revive the child by performing CPR.

Officials told FOX Carolina reporters that the child was transported to the hospital, where he was pronounced dead.

An investigation was launched by the sheriff’s office and the coroner’s office into the circumstances surrounding the death of the child.

Grandmother kills baby by putting opioid in sippy cup, gets 20 years. Angela Denise Brewer, 46, was convicted of Homicide by Child Abuse on Thursday. Prosecutors said Brewer was the sole caretaker of her 14 month old grandson. https://t.co/gwg8217vRw

An autopsy was carried out and samples were sent to the South Carolina Law Enforcement Division for forensic testing.

A warrant in the case revealed the child had 2700 ng/mL of the drug in his system.

In due course of the inquiry it was determined that Brewer was the sole caretaker of her grandchild at the time of death, WSPA reported.

The grandmother, Angela Denise Brewer, 43, of Pickens, was subsequently arrested as a suspect in the case according to Chief Deputy Creed Hashe, FOX California reported.

She was accused of killing her grandson by putting a deadly dose of Oxycontin in the toddler’s sippy cup.

Brewer was sentenced to 20 years behind bars for the crime.

We have a favor to ask of you. We work hard to deliver important and interesting articles to you. Please help support independent journalism by sharing this article with your friends and family. It takes less than a minute. Thank you!