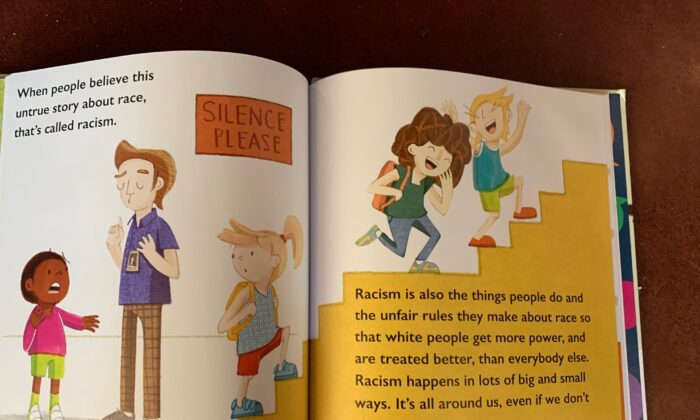 This screenshot captured by Nancy Anderson of the N.C. chapter of No Left Turn in Education shows a page from the book "Our Skin: A First Conversation About Race." (Courtesy of Nancy Andersen)
Critical Race Theory

An education watchdog group is calling for an audit of the North Carolina Department of Public Instruction (NCDPI) after obtaining emails indicating that, despite its denial of such awareness, the department might have known about critical race theory (CRT) content incorporated in a professional development program for pre-kindergarten teachers of disabled children.

The $7 million to fund the program comes from the federal Individuals with Disabilities Education Act (IDEA) Preschool Handicapped Grant awarded to NCDPI.

No Left Turn in Education (NLTE) published the report (pdf) on June 8 with emails showing that the departments that fall under the umbrella of NCDPI approved and then later removed the training materials.

Overarching themes of “decentering whiteness” and “centering children of color” that surfaced were alleged to be a part of the NCDPI’s collaboration with the University of North Carolina (UNC) Chapel Hill’s Frank Porter Graham Child Development Institute (FPG), and the Office of Early Learning (OEL) through a program called the NC Early Learning Network (NC-ELN), though an NCDPI spokesperson later denied NCDPI’s involvement.

According to Nancy Andersen with NLTE, the CRT content was removed from NC-ELN’s website on Jan. 5, the night after the state board of education meeting at which the renewal of the contract was presented.

On each document Andersen captured in a screenshot, the imprimatur at the bottom of the page stated the NC-ELN is a joint project with NCDPI, the OEL, and the FPG.

The NCDPI itself told The Epoch Times on Jan. 25 in a previous report that the material was a part of a separate program unconnected to the contract and unapproved by NCDPI.

The NCDPI spokesperson also said that the NCDPI logo was used “without consent from the Department itself.”

The NCDPI spokesperson added that the content was removed because the NCDPI logo was used at the bottom of the pages without permission “and because they exceeded the scope of the contract.”

After the material was reported, the North Carolina State Board of Education-approved contract for the program came to a halt in January.

After media attention, NCDPI Superintendent Catherine Truitt said in a statement on Jan. 14 that she would not sign the proposal to extend the previously amended pre-K contract.

“Instead, I will create a new contract proposal that has strict guardrails and new accountability measures to ensure the true needs of our youngest and most vulnerable learners are met,” Truitt said.

Both Andersen with NLTE and Sloan Rachmuth, an investigative reporter and president of Education First Alliance NC, told The Epoch Times that the program harbors racist content that violates the Civil Rights Act of 1964, which, in addition to its prohibition on discrimination on the basis of race, religion, gender, and national origin, prohibits the use of federal funds to facilitate such discrimination.

In January 2022, the North Carolina State Board of Education approved the grant to train teachers of disabled preschoolers using CRT-based methodologies through the ELN, a project of the DPI and the FPG.

The emails between NCDPI, OEL, and NC-ELN show efforts to conceal the training material “to ensure contract approval,” NLTE said in its press release, adding that the documents indicate that Truitt gave the order to remove the material from the NC-ELN website before the board’s vote.

Under NCDPI’s direction, NLTE said, FPG, with assistance from NC-ELN, pulled the documents to hide the information from the public.

“This pattern of deceit is unacceptable and shows the extreme measures education bureaucrats take to hide the usage of taxpayer dollars in pushing race-based ideologies onto our most vulnerable kids,” said Andersen, president of No Left Turn in Education’s North Carolina chapter, in a press release. “NC early literacy rates are abysmal, but the Office of Early Learning is focused on misdirecting funds for race-essentialism in pre-K. Based on the findings of our report, we call upon our state government and its agencies to dissolve contractual relationships with the UNC Frank Porter Graham Child Development Institute. Additionally, NLTE demands the state perform a full financial audit of the NCDPI.”

In her report, Andersen said the documents demonstrate that education and university officials were active in establishing CRT throughout the state, and they spent time and resources “discussing tactics to knowingly mislead the public and otherwise disguise their intentions.”

Andersen alleged that NCDPI misappropriated federal funds “to further CRT instruction” while denying its role, employing “rationalizations such as material ‘was taken out of context.’”

“In short, the NCDPI and Frank Porter Graham used federal funds to bring critical race theory to disabled preschool children, denied the materials were based in CRT, and attempted to hide the evidence so the contract would be approved by the NC State Board of Education,” Andersen said.

Andersen called for the NC-ELN to be dissolved and the current director of the OEL to be removed.

“She was aware of the training being developed and helped direct the removal of evidence from the NC-ELN website,” Andersen said.

In addition, Andersen said Truitt should admit to her role in hiding the material.

“She should publicly apologize for supporting the idea that citizen concerns were based in rumor and no evidence existed regarding these trainings,” Andersen said in the NLTE report. “The General Assembly should consider asking Supt. Truitt to resign for misleading the state board of education regarding this material, and her role in presenting a contract using federal funds to bring CRT-based teacher training and materials to preschool children with disabilities.”

Among the many examples of CRT material Andersen included in her report is a book titled “Our Skin,” which appears to be addressing issues of race on its surface, but within it can be found quotes such as: “Racism is also the things people do and the unfair rules they make about race so that white people can get more power, and are treated better, than everybody else.”

Above the text is an illustration of two white children climbing stairs and laughing.

Though there are none directly from Truitt, the emails— dated from March 2021 to February 2022—show collaboration between all organizations to put the material together.

In June 2021, an email showed Amy Rhyne, director of OEL, asking the OEL team to send material related to “social emotional learning” (SEL) and “equity” to Truitt to be reviewed.

From there, emails show an editing collaboration between organizations to replace phrases such as “racial equity” with “cultural equity.”

In January 2022, the NC-ELN director, Sherri Williams, wrote in an email that she had an “urgent request from our funder” to remove material.

“There was a person present at the NC State Bd of Ed meeting this afternoon expressing displeasure with DPI promoting racial equity training. There was some exaggeration and misinformation about teaching ‘hate’, CRT, communism, etc. and they referenced some materials on our website; so our funder is asking that we take this down,” Williams wrote in another email.

The material included a March 2021 webinar in which one consultant stated that she wants “to position myself as a white woman and acknowledge my own privilege and experiential lens or way of knowing the world is that of a white woman in the United States.”

“I continue to examine my own internalized racism and socialization, and I embrace and am grateful for this journey of learning to be anti-racist,” the consultant said.

According to the contract, that consultant gets an annual salary of $113,000.

On January 21, Aysenil Belger, director of FPG, sent an email to Truitt after Truitt tweeted that she would not sign the contract after the material garnered media attention.

Belger said media descriptions of the program are inaccurate.

“Specifically, a statement was made that ‘a program designed by the University of North Carolina teaches 3- and 4-year-old disabled preschoolers to ‘deconstruct whiteness’…’ To be clear, we do not provide training directly to preschoolers and families. We also do not provide training or guidance for any curriculum to be taught to young children in early childhood classrooms,” Belger said.

On Jan. 26, a communications director with FPG referenced The Epoch Times’ request for comment on NCDPI’s statement that its logo on the material was used without permission, and whether the content in question was approved by NCDPI or not.

Though FPG never responded directly to The Epoch Times, in the emails, FPG said, “Ever since the contract began in 2013, our contract administrator (the NC Part B 619 Preschool Special Education Coordinator/s) established and instructed us to use the footer we use for slides and documents produced as part of the ELN work and also established the process we use for content design and development which includes submitting content to the Part B 619 Coordinator/s for review,” later adding, “There is nothing we do that we haven’t already discussed with them.”

FPG said it also talked with NCDPI about the webinars because “Truitt wanted to establish a vetting process specifically for content developed related to equity in June 2021.”

“We talked with them on June 29 about the recordings of the equity webinar being on the website and asked if we needed to take them down and have them reviewed given the new guidance from Truitt (even though they were already done/archived),” FPG stated.

In a Jan. 25 letter addressed to Belger, Truitt addresses Belger’s earlier statement in which he said the program wasn’t for the children but for the teachers.

“While I have no doubt that this is true, there is a subtle distinction between providing training materials for teachers (who then apply this new knowledge in their classrooms with their students and their families) and working directly with preschoolers and their families,” Truitt said. “Furthermore, your training entitled ‘Equity and Cultural Responsiveness—Session 1’ does exactly what the reporting said: ‘We will focus on children and educators’ racial self-identification and ways educators can protect children from the harmful effects of living in a society created through systematic racism,’’ later adding: “To suggest that your ‘work is not directed at or provided to children and families’ is disingenuous at best.’”

Truitt later states that the program occurred in the summer of 2021 and was not part of the “scope of the contract with DPI,” which the ELN “fulfilled without consulting with DPI or allowing for DPI oversight despite using our logo without permission.”

“This does not indicate good partnership,” Truitt said.

On whatever level one wants to place the blame, Andersen said, it’s the entire system that failed.

“You could pin this on one person, but for me, it’s the whole department that’s representative of the entire system of all of these different bureaucracies that collude and blame each other while working on these projects that waste the taxpayer’s money,” Andersen said.

The NCDPI did not respond to The Epoch Times’ request for comment.