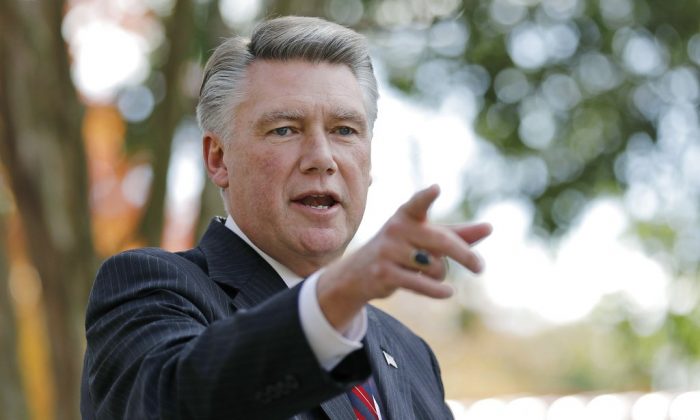 Mark Harris speaks to the media during a news conference in Matthews, N.C., on Nov. 7, 2018. (Chuck Burton/AP File Photo)
Politics

There has been no confirmation of absentee ballot fraud in the unresolved 9th Congressional District race, but the state’s Republican Party said that if evidence was found then it would support a re-election.

Unofficial totals have Republican Mark Harris leading McCready by 905 votes. But the state elections board refused to certify the results last week because of allegations of “irregularities and concerted fraudulent activities” involving mail-in ballots in the district. The board is meeting later this month to hear evidence, but it’s unclear whether the race will be settled then. The board could order a new election.

McCready initially declined to seek a recount but said the allegations changed his mind.

“I didn’t serve overseas in the Marines to come home to NC and watch a criminal, bankrolled by my opponent, take away people’s very right to vote. Today I withdraw my concession and call on Mark Harris to end his silence and tell us exactly what he knew, and when,” said Dan McCready on Twitter on Dec. 6.

He also called on supporters for a fresh injection of funds to support his efforts.

North Carolina law allows only a family member or legal guardian to drop off absentee ballots for a voter but some voters in the county said in affidavits offered by the state Democrat Party that people came to their homes to collect their ballots.

In some states, such as California, such “ballot harvesting” tactics are legal.

A state election board spokesman confirmed Thursday that subpoenas seeking documents had been sent to the Harris campaign, the Red Dome Group, which worked for Harris, and the campaign committee of the sitting Bladen sheriff. The board released documents showing that McCrae Dowless, the contractor hired by Red Dome, seems to have collected the most absentee ballot request forms in Bladen County this fall. Dowless has a felony criminal record.

A campaign lawyer said earlier this week that it wasn’t aware of any illegal conduct in the 9th District race. Harris said last week that his victory should be finalized while the board investigated.

“I support any efforts to investigate allegations of irregularities and/or voter fraud, as long as it is fair and focuses on all political parties. There is absolutely no public evidence that there are enough ballots in question to affect the outcome of this race,” Harris said in a statement, reported ABC 11.

State GOP Executive Director Dallas Woodhouse said that if the state’s election board were to show that absentee ballot issues changed the outcome, he would support a new election.

“If they can show a substantial likelihood it could have changed the race then we fully would support a new election,” he said. If not, the results should be certified, he added.

U.S. House Democratic Leader Nancy Pelosi said Thursday the House “retains the right to decide who is seated” and could take the “extraordinary step” of calling for a new election if the winner isn’t clear.

In the midst of the investigation, the chairman of the State Board of Elections stepped down from his position after Wake County GOP Chairman Charles Hellwig filed a complaint about tweets that the chairman sent.

“When he became chairman of the Board of Elections, no matter how partisan he may have been, he had a duty to act in a way that was at least let us see he was fair, neutral. Maybe he has personal opinions, that’s fine,” Hellwig said at a press conference on Dec. 1, reported ABC 11. “When you do the things he did and say the things he said publicly, that just rips away our confidence in the system.”

Penry made his Twitter account private and said he wanted to step down so that his issues wouldn’t distract from the voter fraud investigation in the 9th Congressional District.