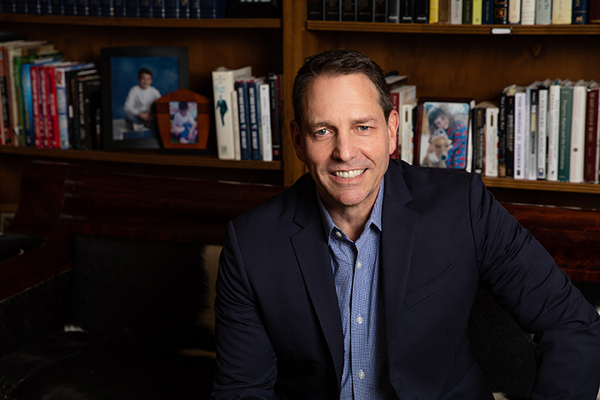 North Carolina could be joining the Convention of States that seeks to restore the balance between the state and federal government using Article V of the United States Constitution.

In March 2021, the North Carolina House passed House Joint Resolution 233, which calls for the state to be added to the convention, now leaving it up to the Senate to follow the House’s lead.

“This has never been done before in American history,” Meckler told The Epoch Times. “The ability to do it is contained within the second clause of Article V of the Constitution.”

Article V gives states the power to call a Convention of States to propose amendments. It takes 34 states to call the convention and 38 to ratify any amendments that are proposed, Meckler said.

Meckler, an attorney who specialized in technology law, has led several efforts to limit the federal government’s power.

In addition to serving as interim CEO of the social media platform Parler in 2021, Meckler co-founded the Tea Party Patriots in 2009, one of the largest Tea Party organizations in the country, before leaving in 2012.

He later founded Citizens for Self-Governance and launched a successful class-action lawsuit against the Internal Revenue Service, which at the time was illegally targeting Tea Party groups.

In 2013, he co-founded COSA with attorney Michael Farris, founder of the Home School Legal Defense Association, to pursue the Article V strategy, which allows for the states to come together to propose constitutional amendments that limit the federal powers and spending, as well as impose term limits on federal officials.

Reining in the Federal Government

“The Article tells us two ways to amend our Constitution,” Meckler said. “One is two-thirds of both Houses in Congress can propose any amendment they want, and then that goes out to the states for ratification. It takes three-quarters, or 38 states, to ratify it. All 27 amendments have come that way by recommendation from Congress.”

Found in the second clause, however, is an alternative to the former way that the Founders provided to override the federal government if there ever got to be a point in American history in which the central powers had become too tyrannical and stopped listening to the American people, Meckler said.

“They needed a way to allow for the states themselves to rein in the federal government,” Meckler said.

For a state to join, the legislature must propose a resolution that doesn’t require a governor’s signature.

“After it’s passed by a simple majority in both chambers, then it becomes a call or a resolution to join the convention,” Meckler said. “So far, 19 out of the required 34 states have called to join just in the last 90 days.”

Wisconsin, Nebraska, Virginia, and South Carolina are among the states that have passed resolutions.

These states are calling for a convention to discuss three issues, Meckler said; the first being term limits on federal officials and Congress.

“This is intended to address the problem with the deep state officials; not only Congress, but staffers, bureaucrats, and judiciary officials who have long-term seats in service to Washington, D.C., but don’t serve the American people,” Meckler said.

The second issue the convention would address is imposing fiscal restraints on Washington, D.C.

“Specifically, this would be for a balanced budget amendment that would involve taxation caps, spending caps, and the imposition of generally accepted accounting principles,” Meckler said. “There’s literally no system of accounting principles that they use in our government.”

Meckler calls the current one in place “unicorns and rainbow” accounting.

“They just write down whatever they want,” he said. “We really never have any idea what they actually spend, and they use off-book and black-book budgeting that would put those who ran a publicly-traded company in prison.”

The third, and what Meckler called the most important issue, is to discuss imposing scope or jurisdictional restraints on the federal government.

“The main problem we have in this country right now is the jurisdictional fight,” he said. “The question is, who decides?”

There is ‘We the People’ and there is the federal government. Who should decide how the country is run?

The Founders had a very clear answer to that, Meckler said. “The people decide.”

Unfortunately, he said, the current situation is that the federal government today can do “almost anything it wants.”

“That’s not what the Founders intended,” he said.

Currently, the federal government is involved in local education, law enforcement, health care, and environmental issues—all intrusions that have been normalized today but not what was planned, Meckler said.

Providing historical context, Meckler pointed to a time after the U.S. Constitution was ratified when Founding Father Thomas Jefferson, a proponent of public education, was establishing the University of Virginia.

A friend had suggested to Jefferson that he take federal funding for the university, and Jefferson responded by stating that it would be unconstitutional without a constitutional amendment, Meckler said.

“Even Jefferson understood that the federal government had no role to play in education,” he said. “Yet today, we have the Department of Education wasting hundreds of billions of dollars, and I would argue damaging our children. It’s not constitutional, and the only way to fix this is by holding a convention.”

Once 34 states call for the convention, each state legislature would commission its own delegates, Meckler said.

The only role of Congress is to choose when and where for the convention to meet.

“The convention will operate very much like a legislature, enacting a rule set before beginning the debate and breaking off into subcommittees,” he said.

When 26 states—a majority—agree on any amendment, the convention then has the power to propose the amendment to the states, Meckler said.

Ratification of those proposed amendments would take place in the states, not in Congress.

“It would take 38 states in their state legislatures voting to ratify before an amendment could become a part of the Constitution,” Meckler said.

Meckler said it’s important to point out that the convention can only make proposals to the states because critics of this strategy warn of a “runaway convention,” the idea of the convention going rogue.

One example that critics of the strategy raise is the possibility of the delegates voting against their states’ wishes. However, those commission delegates, also called commissioners, are bound to their state legislature.

If they were to vote in opposition to their state’s will, they would be replaced and could face up to three years in prison, according to COSA.

The idea of restoring the constitutional balance bothers some on both the fringes of the right and the left, Meckler said. However, he said the proposal of a balanced budget amendment is supported by 85 percent of the American people, while 72 percent, he said, are in support of removing power from the federal government.

Constitutional law scholar Robert Natelson, who’s endorsed the effort, said, “There are far more political and legal constraints on a runaway convention than on a runaway Congress.”

Abraham Lincoln discussed Article V and how it gives states power over the federal government, saying that “the convention mode seems preferable, in that it allows amendments to originate with the people themselves.”

“People have been trying to do this since our country began,” Meckler said. “Our effort began nine years ago in August 2013. Since, we’ve been working consistently building this project, with 5.2 million supporters across the country.”

‘The Only Way to Save This Country’

There are volunteer teams in every state, Joy Ruhmann, the North Carolina state director for the Convention of States, told The Epoch Times.

Ruhmann put her career as a leadership consultant on hold to commit her time to the convention.

She orchestrated the June 8 rally, which will have speakers in addition to Meckler such as Lt. Col. Allen West, a former Florida congressman; former chairman of the Republican Party of Texas Rick Green, a constitutional coach and founder of Patriot Academy; and Jonathan Uzcategui, a Venezuela-born North Carolinian who speaks out against the dangers of socialism.

“I think that what we are trying to do with the Convention of States is the only way to save this country in the long term,” Ruhmann said. “If we can’t get corruption out of Washington and if we can’t give the power back to the states where it’s supposed to be—based on our Constitution—then all hope is lost for the Republic.”