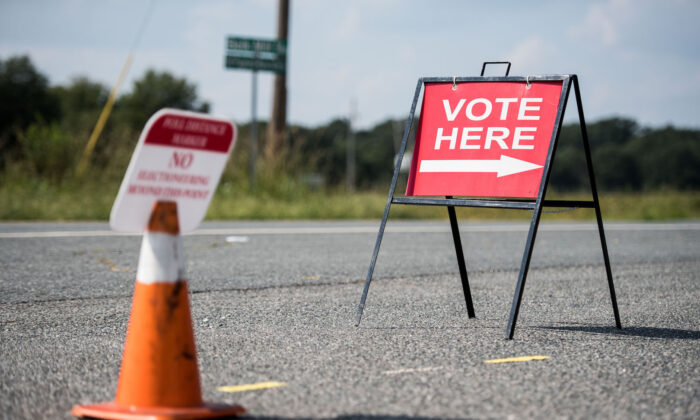 A sign directs voters outside of a polling station during the special election between Democrat Dan McCready and Republican Dan Bishop in North Carolina's 9th Congressional District in Marshville, North Carolina, on Sept. 10, 2019. (Sean Rayford/Getty Images)
By Katabella Roberts

A North Carolina appeals court on Feb. 18 temporarily blocked the state from using its new voter identification law in elections, ruling that the policy was “enacted with racially discriminatory intent and thereby intentionally discriminates against voters of color.”

Senate Bill 824, also known as “An Act to Implement the Constitutional Amendment Requiring Photographic Identification to Vote,” required voters to present a certain type of photo ID before casting a ballot.

A three-judge panel said in a 45-page ruling (pdf) on Tuesday that the law had been “motivated” by “discrimination,” adding that it would “likely have a negative impact on African Americans because they lack acceptable IDs at a greater rate than white voters.”

“The General Assembly’s history with voter-ID laws, the legislative history of the act, the unusual sequence of events leading to its passage, and the disproportional impact on African American voters likely created by S.B. 824 all point to the conclusion that discriminatory intent remained a primary motivating factor behind S.B. 824, not the Amendment’s directive to create a voter-ID law,” the panel said in its ruling.

“This is especially true where the Amendment itself allows for exceptions to any voter-ID law, yet the evidence shows the General Assembly specifically left out types of IDs that African Americans disproportionately lack,” the judges wrote.

“Such a choice speaks more of an intention to target African American voters rather than a desire to comply with the newly created Amendment in a fair and balanced manner.”

The voter ID law was passed as a constitutional amendment in the 2018 general election. In December, a federal court issued a preliminary injunction against the same voter ID law, finding that it was at least partially motivated by an attempt to discriminate against certain voters in violation of their rights to equal protection under the law as guaranteed by the U.S. Constitution.

The appeals court then reversed another three-judge panel in the lower Wake County Superior Court, which had allowed the voter ID law to remain in effect pending trial. Tuesday’s decision could also extend that block until the election in November.

The North Carolina Republican Party Chairman Michael Whatley said that Tuesday’s ruling was “ridiculous” and said the opinion was “invalidating the votes of more than 2 million North Carolinians who voted for a constitutional amendment in 2018.”

“The opinion, issued by the North Carolina Court of Appeals, ignores the fact that more than 30 other states have enacted similar laws which have been upheld by federal courts,” Whatley said in a statement.

“An overwhelming percentage of North Carolinians of every demographic support voter ID and we are very disappointed to see a panel made up of three Democratic judges overturning their votes by judicial fiat.”