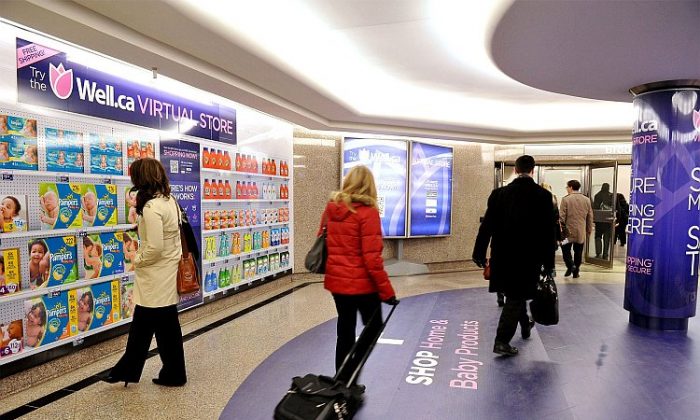 Shopping in a store free of lineups, bulky carts, parking lot jams, and rude cashiers is now a reality in Canada.

North America’s first virtual store was unveiled in Toronto this week, allowing customers to purchase daily necessities by simply scanning products with their cellphones during a brief stop as they commute.

The store is little more than pictures of products displayed on walls, which serve as a visual representation of regular store shelves. The 2-D store is along Toronto’s PATH system, an extensive underground walkway that links 17 miles of shops, office towers, and subway stops.

Shoppers can choose from 120 health, beauty, and baby products by scanning the product’s barcode with their smartphones—after downloading the app—and the item is placed in their online shopping cart.

Once customers have paid, the items are immediately delivered to their homes at no extra charge.

“We’ve mashed together our love of smartphones, the convenience of e-commerce, and free shipping to do something no other retailer delivers,” says Ali Asaria, founder and CEO of Well.ca.

“Our website and this virtual store are perfect options for busy consumers who don’t have time to wait in line for a box of diapers or a tube of toothpaste.”

The Toronto store will serve as a market trial from April 2–30, and if successful, the company hopes to expand its locations. The trial will feature discounts on popular brand name items.

“Our aim is to inspire Canadians to imagine new ways to shop in Canada,” says Paige Malling, vice president of marketing for Well.ca.

“We’d love to expand beyond Toronto.”

The virtual store concept was first tested in Korea last year by retail chain Homeplus, owned by grocery giant Tesco. The company was aiming to attract more South Korean commuters, statistically some of the busiest workers in the world.

In their research, Tesco marketers realized that rather than trying to get more Koreans into the store, they needed to bring the store to time-pressed consumers where it was most convenient for them to shop.

The first virtual store was placed in subway stations in Seoul, offering standard supermarket fare as well as office supplies and toiletries that could be purchased while waiting for the next train.

After the campaign was launched, Tesco’s online sales increased 130 percent, and the Tesco Homeplus Smartphone app was downloaded 900,000 times.

In February, Tesco announced it would be expanding virtual stores to more than 20 bus stops in South Korea.

“The growing trend in smartphones in South Korea means that virtual grocery shopping is even more accessible and convenient than ever before. The first virtual store in the Seoul subway was a great success with customers and has paved the way for the opening of these new stores at bus stops,” S.H. Lee, CEO of Tesco Homeplus, said in a press release.

“We’ve found it most popular among 20- to 30-year-olds, so the new stores will be opening close to a local university and other pedestrian areas.”

A mockup of the Tesco Homeplus virtual store is on display at the London Design Museum, where it will remain until July 15.

The model is also being tested in Australia. In February, Woolworth’s supermarket opened a virtual store in Sydney’s Town Hall train station, a major commuting hub.