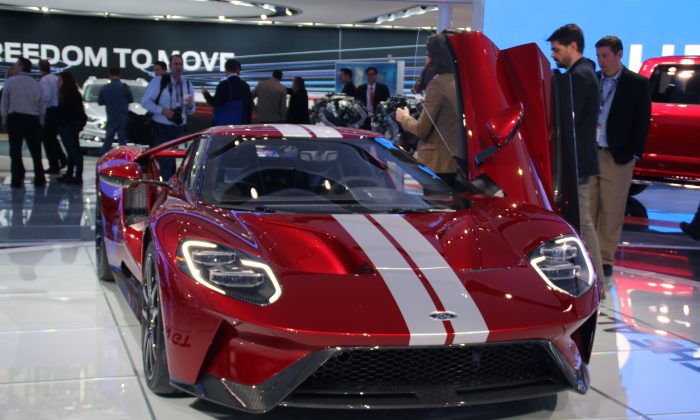 At the beginning of every calendar year for some time now, auto show season begins in earnest for eager OEMs, anxious to present their latest and greatest design and engineering automotive creations to an eagerly anticipating world. This year was no exception.

Manufacturers proudly presented and displayed vehicles soon-to-be-available in dealer showrooms around the continent. Some showed so-called concept vehicles that may well be built within a year or so with a few tweaks, based upon feedback. Others demonstrated their acumen by showing the world concepts of what might be–at some point in the foreseeable future.

No matter, at the North American International Auto Show in Detroit, there was something for everyone.

At this show, automotive manufacturers were there with armies of designers, engineers, product experts and, of course, senior executives—all on hand to outshine their competition in this fast-paced, ever-changing automotive environment.

If there was a theme to this year’s spectacle, it would be around the looming presence of semi-autonomous and autonomous cars. More on that later.

In spite of this, there was the noticeable absence of a couple of premium manufacturers from the floors of Cobo Hall—specifically, Jaguar Land Rover and Porsche.

Regardless, in no particular order, what follows are some of the new innovative vehicles which caught our attention over the two days the show was open to international media. To be clear, there were three traffic-stopping incidents at this year’s show: the weather – downtown Detroit attempting to handle a snow fall; when Joe Biden, America’s Vice President showed up, ostensibly shopping for a new Corvette; and our first featured car.

The one vehicle that seemed to garner most attention throughout media days was likely the all new Kia Stinger GT. Originally presented as a concept two-door coupe a couple of years ago, drawing all manner of appropriate admiring “ooohs” and “aaahs”, this 2018 four-door (OK, technically, five since the rear door is a lift back), was poked and prodded by admirers bordering on reverence. Imagine the sheer audacity that a Korean manufacturer who has been selling vehicles in North America for less than 20 years, showed the world just how a combination of gifted designers, led by German wunderkind, the perennially clad in black Peter Schreyer and former BMW performance specialist, Albert Biermann could develop and build a car that has visual appeal and, by all accounts, will allow its performance to speak volumes. This is a car built by driving enthusiasts who asked the question, “Why not?”

This concept vehicle drew my attention every time I walked by Volkswagen’s sprawling display. It made me smile. While the concept presented may never actually make it to market, it demonstrates the willingness to colour outside of the lines. An all-electric-mode vehicle with a combination of lasers, radars, ultrasonic sensors, and cameras will enable the concept to theoretically take care of driving all by itself. In fact, in full “robo-drive” mode, which VW calls ‘I.D. Pilot’, the driver’s seat can be turned 180 degrees to face the rear passengers! Further, a slight push on the bizarrely shaped steering wheel causes it to retract into the dashboard, and decouple from the steering gear. Touching the wheel or pedals deactivates autonomous mode and allows the driver to reassume control. Volkswagen says a fully autonomous drive mode of this type would be “conceivable” starting in 2025. Back to reality for a moment and going forward, VW also advised that there will be an all-new large SUV named Atlas available and a seven-passenger version of the popular Tiguan.

The Camry has been a consistent best-seller for the Japanese conglomerate Toyota since first introduced back in 1982 and, after the unveiling of the eight-generation 2018 model, there is every indication that its popularity will continue. In fact, in the mid-size category, some pundits might consider this latest iteration as a game changer—one which might even slow down North American’s love of SUV and CUV-type vehicles, influencing some to purchase a sedan! Style-wise there is much to like about this car.  All 2018 Camry’s have 10 standard airbags and Toyota’s Star Safety System, which includes enhanced vehicle stability control, traction control, electronic brake-force distribution, brake assist, anti-lock braking system, and smart stop technology. Toyota advises the new Camry’s interior is a “fusion of functionality, futuristic styling, and a high degree of personal space and craftsmanship.” Translated, expect a sporty, cockpit-like environment for the driver while the passengers get plusher materials, more room and more infotainment options.

The enterprising teams of engineers in Stuttgart, Germany presented all-new versions of their popular 5-series cars. Visually they look similar to the last-generation 5-Series (and a lot like the new 7-Series), but this is an all-new car. BMW has taken the tech from the 7-Series and paired it with the new engines that made their debut in last year’s facelifted 3-Series. The new 5-Series rides on a slightly longer wheelbase than its predecessor but front and rear track lengths remain the same. BMW says the chassis is lighter and stiffer than before, and interestingly, will offer an anti-roll system that uses electric motors, rather than hydraulics. Like the new 7-Series, the 5-Series gets all sorts of semi-autonomous features and futuristic tech in the interior. There’s active cruise control, lane departure warnings, lane keep assist, traffic jam assist, and a system that can autonomously perform evasive maneuvers at speeds of up to 100 mph!

Not satisfied with their dominance in the ½ ton pick-up category, Ford gave the F-150 a light styling update and one very interesting engine option for 2018: a 3.0 L PowerStroke diesel V6, the first oil-burning engine offered on the light-duty truck. Details on the new light-duty diesel engine—things like horsepower, torque, fuel consumption, and cost of the diesel option remain unknown. Previously, only the heavy-duty F-250 and F-350 Super Duty were available with diesel engines. The new 3.0 L PowerStroke lets Ford compete with the Ram 1500 EcoDiesel. This added utility will likely further cement the F-150 as the light-duty leader.

Originally introduced at NAIAS in 2015, the Markham, Ontario-manufactured Ford GT supercar was available for much closer inspection. Hand built, each high-performance two seater promises a unique experience for the driver and passenger. Unlike the majority of vehicles on the road today, finding the perfect driving experience is quite different: the seat does not move, but the dashboard and the square-like steering wheel move toward the driver, much like a Formula 1 race car! A different experience to be sure. With a price tag hovering around a half million dollars, Ford expects to sell every Ford GT it builds and that there will be a wait-list!

The Nissan Qashqai is a compact crossover produced by Japanese car manufacturer Nissan since 2006 and available in most markets worldwide, except North America until 2017 with the introduction of the 2018 model. If you find that confusing, in the U.S., this slightly smaller than the best-selling Rogue will be referred to as the Rogue Sport. On the dealer menu, the front-engine, front-wheel drive (AWD available) Qashqai will fit between the unique-looking Juke and the Rogue.

With the introduction of the Vmotion 2.0 concept, Nissan is taking the family sedan to the next level. The sharply-creased four-door sedan debuted and it’s loaded with autonomous tech and modern styling. The big news? Self-driving technology. The Vmotion features Nissan’s next-generation ProPilot, which allows for autonomous driving not just on highways, but also in urban areas and intersections. From a styling standpoint, much of what we saw may end up being presented as the next generation Altima family sedan in the next few years.

Other OEMs made significant introductions at this show which is expected to welcome more than one million consumers through their turnstiles. Volvo, Honda, Mercedes-Benz, Audi, Lexus, to name a few all announced and presented vehicles that will have significant appeal to consumers.

There is something almost magical about auto shows, especially when any manufacturer unveils something new and exciting.

These days, however, it is not unusual for an OEM concept to make it into production. Years ago, designers almost attempted to outdo one another with their ingenuity and often the economic practicality of final production was nothing more than a dream.

Economics in the 21st century suggest otherwise, so do not be surprised when you see a favourite concept on your local dealer’s floor in the not too distant future!