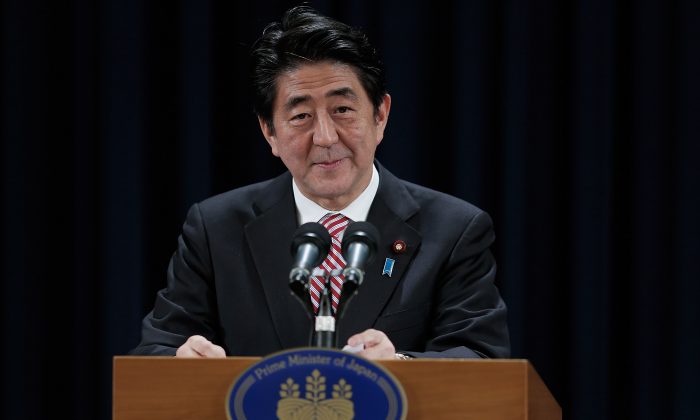 Prime Minister of Japan Shinzo Abe speaks during a press conference in the Asia-Pacific Economic Cooperation (APEC) Summit in Beijing, China, on Nov. 11, 2014. An alliance of Japan, India, and other south Asia and Pacific democracies could prove an effective counterweight to an expansionist Chinese regime. (Lintao Zhang/Getty Images)
Viewpoints

Negotiating a free trade agreement with an increasingly totalitarian and plutocratic party-state in China, which treats its Tibetan, Falun Gong, Uyghur, Christian, farm, urban worker, and other communities appallingly, should be unthinkable for any democratic country.

Canadian Clive Ansley, who practised law in Shanghai for 14 years until 2003, notes that its Communist Party has long operated outside and above the law:

“China is a brutal police state…There is a current saying amongst Chinese lawyers and judges who truly believe in the Rule of Law…: ‘Those who hear the case do not make the judgment; those who make the judgment have not heard the case’…. Nothing which has transpired in the ‘courtroom’ has any impact on the ‘judgment.’”

Nonetheless, with the U.S. trade deficit with China for the first nine months of 2017 alone being $US274 billion and the Canadian one being also far too high, some in both countries still believe our goods and services could obtain better access to China’ s market through bilateral free trade agreements.

Many others say that Japan, India and a revised Trans Pacific Partnership (TPP), including a number of other regional democracies with rule of law, are the best major trade option for both Canada and the United States in Asia and the Pacific Rim. Although the Trump administration has shunned the TPP, a future U.S. president might well join.

Renegotiating the North American Free Trade Agreement (NAFTA) quickly and successfully is also vital. The United States, Canada and Mexico now trade more than US$ 1.2 trillion in goods yearly, with Canadians and Mexicans being the two top buyers of U.S. exports. Millions of skilled workers and consumers in all three nations require NAFTA to continue in essentially its present form.

While likely that chaos will result if the Trump administration scraps NAFTA, the current odds of successful negotiations at the upcoming next round in late January are only about 50-50. The White House could also seek to withdraw from it by executive order.

Japan, the world’s third-largest economy, which has assisted many nations in Asia, appears to be throwing its business, diplomatic and political weight behind India and the TPP. Its snap election in October returned to office prime minister Shinzō Abe and his Liberal Democratic Party(LDP) with 312 seats in its 465-member House of Representatives.

India in turn has become Asia’s fastest-growth economy and is expected to surpass China in population by 2022. Under Prime Minister Narendra Modi, its increasing self-confidence and need for investment is resulting in continuously falling trade and investment barriers.

The TPP was intended to create a unified counterbalance to China’s regional power and magnify the trading capacity of democratic nations having the rule of law, social market economies, fair trade, and freedom of the seas—values some of which Canada’s Prime Minister Justin Trudeau recently voiced in Beijing.

Modi chose a visit to Tokyo to reproach China on its bad behavior in Asia, alluding to the Chinese military build-up in the South China Sea, its heavy-handedness in Tibet, its territorial ambitions in northern India and more. He added, “Everywhere around us, we see an 18th-century expansionist mindset: encroaching in other countries, intruding in others’ waters, invading other countries and capturing territory.”

Australia, similar to Canada in many ways, but with a heightened awareness of the security challenge represented by Beijing, has embraced the emerging Japan-India coalition. At the first India-Australia-Japan trilateral dialogue in 2015, the three governments discussed China at length, and, according to the Japanese, there was a high degree of consensus on the issues raised.

The participation of Australia is significant because it indicates that smaller democracies with Pacific interests needn’t choose between China and their traditional alliances. Australia has a bilateral free trade deal with Beijing, but this doesn’t mean Australians are naïve about the need to protect their security interests or the dangers of becoming overly reliant on a regime that believes any attempt to counter its ambitions is an affront.

The world economy is now improving overall and unemployment is mercifully falling in some nations despite predatory trade and other economic practices by China, Russia, and others. Canada should still trade cautiously with the Middle Kingdom, but our recent experience with the aborted launch of free trade negotiations in Beijing indicates that trade cannot outrank a judicious advancing of our strategic interests in concert with those who share our values.

Japan, India, and a revised TPP are the best trade option for both Canada and the United States in Asia.