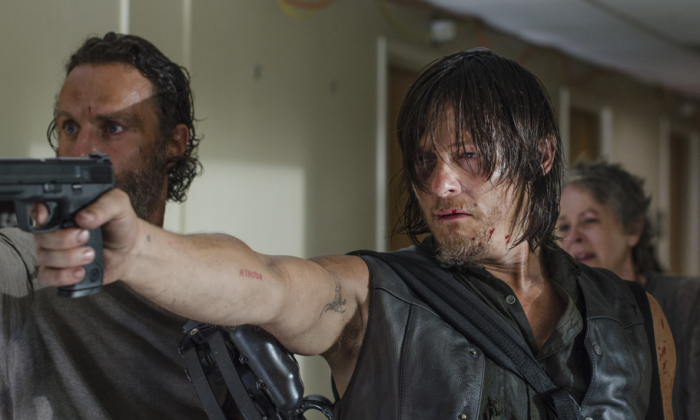 Norman Reedus, one of the stars of The Walking Dead, says that cast members miss the show as much as the fans.

Half of season 5 has aired but new episodes don’t start back up until February 8, 2015 due to the usual winter break.

“I do too. You know, to be honest, I do too,” Reedus told Access Hollywood recently when notified how fans miss the show so much.

The Walking Dead cast is well-known as being tight-knit, and the Daryl Dixon actor said one way they stay in touch while not filming is through a lot of text messages and phone calls.

Reedus also revealed a strange tradition that has started among some of the cast members, including Andrew Lincoln, when discussing how they text each other fun messages a lot.

“We all do actually. All of us do that. I was doing it [the other] night with Greg [Nicotero] and Steven [Yeun] and Andy [Lincoln] and Chandler [Riggs], because I found all these pictures that when we were in Comic-Con, in San Diego, we have this ritual where we get up super early, and we meet down on the beach in bathrobes and then we just run into the ocean and it’s freezing, but it’s like, it’s become a tradition now, so I found all these photographs, and we had a little text chain going on,” Reedus told Access.

Reedus said in a previous interview with AMC that he misses all the characters and actors that have been lost, which now includes Emily Kinney.

“I consider him a really good friend. When Beth and Daryl bonded, Norman and I did too because we were the only ones shooting during that episode,” Kinney said in her own interview with AMC about episode 12 of season 4, Still. “I trust him and feel that crossover in real life. He stays in the moment in such a beautiful way. It’s really inspiring.”

“It’s interesting because when they come on, I kind of look at them the way Daryl would look at them,” he said. “I don’t really talk to them, I kind of give them dirty looks, and then after a couple of episodes when they’re all beat up and they have scrapes all over their bodies and they’re kind of walking as if they’re 95 years old, then I open up and I’m like, ‘Hey, nice to have you on board.'”