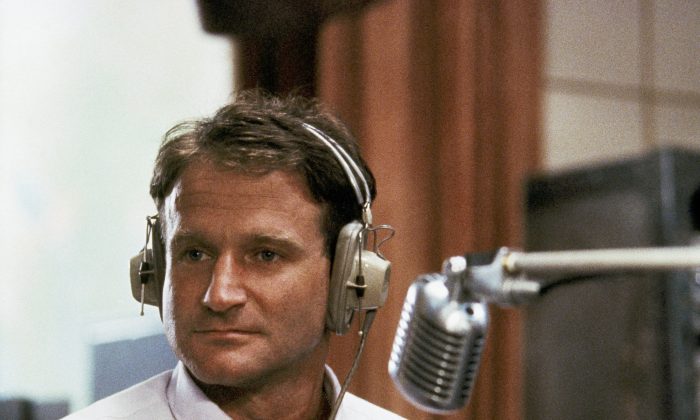 MacDonald said that it was his first stand-up appearance on David Letterman and he had to follow Williams, “the funniest man in the world.”

“I was a punk kid from rural Ontario and I was in my dressing room, terrified,” he said.

“I guess he heard me say his name, cause in an instant he was at my side. He was a jewish tailor, taking my measurements. He went down on his knees, asked which way I dressed. I told my friend on the phone that the funniest man in the world was on his knees before me, measuring my inseam.”

Macdonald continued: “My friend didn’t believe me so I said, ‘Could you talk to my friend, sir.’ The funniest man in the world took the phone and for ten minutes took my friend’s Chinese food order. I laughed and laughed and it was like I was in a dream because no one else was there. No one.

“The place was out of Moo Shoo Pork, and there was nothing he could do about it. He angrily hung up on my friend and I was about to thank him when he said I hadn’t even tried the jacket on. Then the funniest man on earth dressed me, a complete stranger, and i remember he ended with a windsor knot. He spoke mostly yiddish, but when he finished he was happy with his job and turned me to a mirror to present myself to me.

“No one witnessed any of this. No one. The funniest man alive was in my dressing room a good half-hour and was far funnier than the set I had to do soon. All of a sudden it was, had to. When he left my dressing room, I felt alone. As alone as I ever remember feeling. Until today. Unacceptable.”